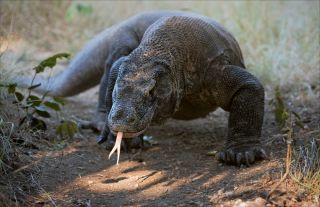 Komodo dragons have long, forked tongues that they use to help smell and taste.
(Image: © Sergey Uryadnikov / Shutterstock)

Komodo dragons are the largest living lizards in the world. They are identified by their massive size, flat heads, bowed legs and long, thick tails. The name comes from rumors that a dragon-like creature lived on the Indonesian island of Komodo. No Western scientists had seen a Komodo dragon until 1912, according to the San Diego Zoo. Local people call them "ora," or "land crocodile."

The average size of a male Komodo dragon is 8 to 9 feet and about 200 lbs., according to the Smithsonian National Zoological Park, but they can reach a whopping 10 feet (3 meters) in length. Females grow to 6 feet (1.8 m).

Komodos come in a variety of colors, including blue, orange, green and gray. Their skin is rough and durable, reinforced with bony plates called osteoderms. They have long claws and a large, muscular tail.

Komodos have good vision; they can see objects as far away as 985 feet (300 m), according to the Smithsonian Zoo. They are also speedy. They can run briefly up to 13 mph (20 kph) but prefer to hunt by stealth — waiting for hours until prey cross their path.

Their sense of smell is their primary food detector, however. According to the Smithsonian Zoo, Komodo dragons, like snakes, use their forked tongues to sample the air, and then touch the tongue to the roof of their mouth, where special organs analyze the airborne molecules. If the left tongue tip has more concentrated "smell," the dragon knows that their prey is approaching from the left.

Komodos are very rare and are found in the wild only on five islands: the Lesser Sunda Islands of Komodo, Rinca, Gili Montang and Gili Dasami — all within Komodo National Park — and the island of Flores, where the Komodo roams freely.

The lizard's habitat can be anything from a tropical dry forest to a savanna to a deciduous monsoon forest. No matter where they live, the Komodo likes extreme heat. It is usually around 95 degrees Fahrenheit (35 degrees Celsius) with 70-percent humidity on the islands of Indonesia, according to the San Diego Zoo.

Komodos have dual-purpose homes. To stay warm at night, they make or find burrows to nestle down in. During the day the same burrow keeps them cool.

Komodo dragons are carnivores, meaning they eat meat. They are such fierce hunters they can eat very large prey, such as large water buffalo, deer, carrion, pigs and even humans. They will also eat smaller dragons. They can eat 80 percent of their body weight in one feeding, according to the National Geographic.

The Komodo has a unique way of killing its prey. First, it springs up and knocks the prey over with its huge feet. Then they use their sharp, serrated teeth — which are a lot like a shark's — to shred their prey to death. If the prey escapes, it will die within 24 hours of blood poisoning because the Komodo's saliva contains 50 strains of bacteria, according to National Geographic. With its fantastic sense of smell, the Komodo will find the dead animal and finish its meal.

According to the San Diego Zoo, while recent research suggests that Komodo dragons are venomous due to their saliva, more studies are needed before making such a conclusion.

Komodo dragons are generally solitary outside of mating season. Males maintain and defend a territory and patrol up to 1.2 miles (2 kilometers) per day. Komodo dragons mate between May and August and females lay about 30 eggs each in September.

Komodo dragon mothers will also build decoy nests to confuse predators and keep her eggs safe. Then she will incubate the grapefruit-sized eggs for around three months. This group of eggs is called a clutch.

There is no evidence that parents care for newly hatched Komodos, according to the Smithsonian Zoo. At birth, baby dragons are only 12 inches (30 centimeters) long. As soon as they hatch, the young will run away and climb up trees to avoid being eaten by their mother or other Komodos. When they are 4 years old and around 4 feet (1.2 m), the young Komodos will come down and live on the ground, according to the San Diego Zoo. Those that survive can look forward to a long life. A Komodo can live to more than 30 years.

Komodo dragons are a species of monitor lizard, which are large reptiles found in Africa and across Asia. The taxonomy of Komodo dragons, according to the Integrated Taxonomic Information System (ITIS), is:

According to the International Union for Conservation of Nature's Red List of Threatened Species, the Komodo dragon is not endangered, but it is considered vulnerable. The World Animal Foundation estimates the number of Komodos in the wild to be 6,000. This population is split among the islands, with 1,700 on Komodo, 1,300 on Rinca, 100 on Gili Motang and around 2,000 on Flores. They are protected within the Komodo National Park.

Komodo dragons hatched for the first time outside of Indonesia in 1992 at the Smithsonian Zoo, according to a zoo fact sheet. The zoo reports that four clutches have hatched and 55 offspring are now living in more than 30 zoos around the world.