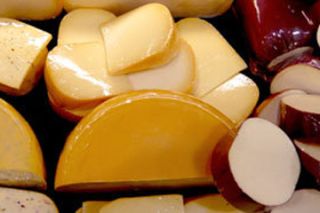 Cheese is a popular treat, but it has a dark, dangerous side you may not know about.
(Image: © stock.xchng)

Of all the things your mother told you to watch out for, chances are cheese wasn't on the list. But as engineers and motorists in Norway have discovered, cheese has a dark, dangerous side.

Burning goat cheese fueled a fire that raged for five days inside Brattli Tunnel near Tysfjord in northern Norway, the BBC reports. The inferno filled the tunnel with fumes so toxic that fire suppression efforts had to be delayed.

The extent of damage in the tunnel is so severe it's expected to remain closed for several weeks. "We can't go in until it's safe," said geologist Viggo Aronsen, as quoted by the BBC.

Clearly, this was no ordinary cheese. A sweet Norwegian delicacy named brunost — a brown, caramelized cheese made from goat's milk —  was to blame for the ferocity of the fire, reports Time.com.

A truck was carrying 30 tons (27 metric tons) of the treat when it somehow caught fire in the tunnel. The driver abandoned the truck after realizing the blaze was out of control,  according to the BBC.

But how exactly does cheese burn? Like most foods high in fats and oils — cooking oil, bacon, peanut brittle — cheese is combustible if it gets hot enough. And again, this was no ordinary cheese. Brunost is up to 30 percent fat and contains more sugar than most cheeses. Both fat and sugar are combustible and can fuel a fire.

Police officer Viggo Berg told the BBC the high concentration of fat and sugar in the brunost cheese makes it burn "almost like petrol if it gets hot enough."

Most fires involving cooking oils or fats burn hotter than fires caused by flammable liquids, and they cannot be suppressed with water or an ordinary fire extinguisher. A Class K fire extinguisher is necessary for controlling these kinds of fires, according to the Federal Emergency Management Agency, which is why Class K extinguishers, which emit a fine chemical mist, are often found in commercial kitchens.