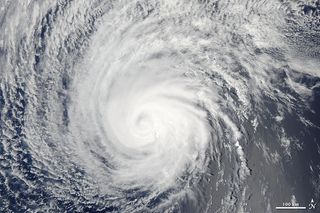 Hurricanes generate sound waves detectable through the air thousands of miles away, which could be a good way to measure the wave conditions near these storms, a new study suggests.

Such findings could help improve models to predict and prepare for dangerous storms, the scientists behind the study said.

Hurricanes can generate winds of more than 160 mph (250 kph), whipping up the sea surface to waves up to 70 feet (20 meters) high. When one such ocean wave slams into an equally tall wave traveling in the opposite direction, the collision results in low-frequency sound waves in the atmosphere that scientific instruments can hear thousands of miles away. These infrasound signals are known as microbaroms.

"Signals of ocean waves were first observed in seismic records in the early 1900s and were considered noise to their earthquake signals," said researcher Kwok Fai Cheung, an ocean engineer at the University of Hawaii at Manoa. "In the 1940s, articles were published in scientific journals tracing the signals recorded in the middle of North America to marine storms. This is reinforced by a paper published by Russian scientists in the 1990s that traced the origin of infrasound signals recorded in Siberia to the hurricanes in the Pacific."

As hurricanes move, past studies revealed, waves they generated earlier in time will interact with ones they generate later. This produces a strong microbarom signal in the storm's wake. Indeed, it is possible "to hear storms making waves halfway across the globe," said researcher Justin Stopa, an ocean engineer also at the University of Hawaii at Manoa.

In principle, listening to microbaroms can help researchers continuously monitor ocean wave activity and track marine storms. "The strongest infrasound signals come from the storm center, which is the most dangerous portion of the hurricane," Stopa told OurAmazingPlanet.

Using modeled wind speed data, the investigators simulated wave conditions during the hurricanes. These estimates served as the basis of an acoustic model to calculate microbarom activity.

The research team's predictions matched the microbarom signals the Hawaii sensor array detected. In fact, the scientists note the microbaroms from the hurricanes drowned out the much weaker signals from other phenomena.

"This combination of observations and simulated data will enable better understanding of marine storms, including hurricane behavior and our climate," Stopa said. "This will enable better models that have the ability to predict and mitigate hazards harmful to humankind." [In Photos: Notorious Retired Hurricane Names]

The models need further refinement, however, the researchers noted.

"There is much more work that needs to be done before infrasound measurements can be used as a forecasting tool," Cheung told OurAmazingPlanet. The atmosphere is a difficult environment to model how sound travels due to rapidly changing conditions there, which affect the density of air and thus the speed of sound through it. These new findings "represent a first step of this long process," Cheung said.

Stopa, Cheung and their colleagues Milton Garcés and Nickles Badger detailed their findings in the December issue of the Journal of Geophysical Research-Oceans.