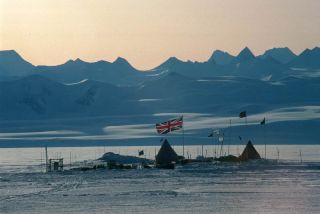 The Union Jack flies over a field camp at Lake Ellsworth. In the background are the Ellsworth Mountains, the highest range in Antarctica.
(Image: © Neil Ross/University of Edinburgh. )

After fighting with the Antarctic ice for 20 hours through Christmas Eve, a British Antarctic Survey team has reluctantly called off its mission to retrieve water samples from an ancient subglacial lake.

The decision to halt drilling through the ice down toward Lake Ellsworth came after the team failed to connect the project's main and secondary boreholes, Martin Siegert, the lead investigator for the project, said on the project's blog.

Lake Ellsworth lies under 2 miles (3 kilometers) of ice and has been sealed off from the outside world for up to 1 million years. Scientists with the survey have been engaged in a 16-year attempt to drill down and take water samples from the lake. They say that if microbes and other forms of life are living in the frigid water, away from sunlight, those life forms may help researchers better understand the origins of life on Earth and the possible forms life could take on other planets.

The scientists were trying to connect the boreholes via a cavity located 300 meters (984 feet) below the ice surface. The cavity recirculates water from the main borehole and would have equalized pressure had the drill penetrated Lake Ellsworth. Running low on supplies

The camp has been on the ice since Nov. 22, and drilling started on Dec. 13, using a specially designed hot water drill. The effort to establish the connection took so much hot water and fuel that the scientists must now return to the United Kingdom and regroup for next year. [Extreme Living: Scientists at the End of the Earth]

"For reasons that are yet to be determined, the team could not establish a link between the two boreholes at 300 meters depth despite trying for over 20 hours," wrote Siegert, a glaciologist at the University of Bristol. "During this process, hot water seeped into the porous surface layers of ice and was lost. The team attempted to replenish this water loss by digging and melting more snow, but their efforts could not compensate. The additional time taken to attempt to establish the cavity link significantly depleted the fuel stocks to such a level as to render the remaining operation unviable. Reluctantly the team had no option but to discontinue the program for this season.

"This is, of course, hugely frustrating for us, but we have learned a lot this year," Siegert said. "By the end the equipment was working well, and much of it has now been fully field tested. A full report on the field season will be compiled when the engineers and program manager return to United Kingdom."

The harshness of the Antarctic environment and the complete darkness of winter there mean that the team can be at the site only during the comparatively mild months of austral spring and summer, from November through January.

This was not the first snag in the project. A circuit used in the main boiler that supplies hot water to the drill burned out twice earlier this month, forcing the team to await resupply.

At the time, Siegert noted that such difficulties are not unusual when working in Antarctica. "It's a very hostile environment; it's very difficult to do things smoothly," he said on the project's blog.

The drill would have crunched through the ice to the fresh lake water, then sent 24 titanium canisters through the borehole to take water samples. When the drill first started up, the team had to shovel snow in shifts for three days and three nights to melt enough for the needed 15,850 gallons (60,000 liters) of water, according to the project's blog.

The British group is one of several teams racing to recover water samples from lakes trapped beneath the Antarctic ice.

A group of Russian scientists is drilling down into the waters of Lake Vostok, the largest of Antarctica's buried lakes. The team reached the lake's waters during the last drilling season, on Feb. 5, but the few microbes it found in the retrieved samples were all contaminants from the drilling apparatus.

However, another group of scientists has found a thriving community of microbes in Lake Vida, another buried Antarctic lake that is thought to have been isolated from the rest of the world for about 2,800 years.

In early 2013 an American team is planning to drill to hidden lakes in West Antarctica.