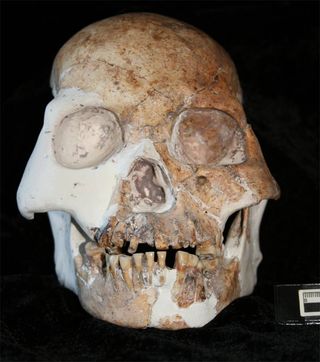 Mysterious fossils of what may be a previously unknown human species were uncovered in caves in China. The hominins lived some time between 11,500 and 14,500 years ago, meaning they would have shared the landscape with modern humans when China's earliest farmer were first appearing. Discovered at what is called Red Deer Cave in southwest China, the hominins have been dubbed the Red Deer Cave People. A skull of the possibly new hominin, shown here. [Read full story]
(Image: © Darren Curnoe.)

The controversial extinct human lineage known as "hobbits" gained a face this year, one of many projects that shed light in 2012 on the history of modern humans and their relatives. Other discoveries include the earliest known controlled use of fire and the possibility that Neanderthals or other extinct human lineages once sailed to the Mediterranean.

Here's a look at what we learned about ourselves through our ancestors this year.

A trove of discoveries this year revealed a host of other extinct relatives of modern humans. For instance, researchers unearthed 3.4-million-year-old fossils of a hitherto unknown species that lived about the same time and place as Australopithecus afarensis, a leading candidate for the ancestor of the human lineage. In addition, fossils between 1.78 million and 1.95 million years old discovered in 2007 and 2009 in northern Kenya suggest that at least two extinct human species lived alongside Homo erectus, a direct ancestor of our species. Moreover, fossils only between 11,500 and 14,500 years old hint that a previously unknown type of human called the "Red Deer Cave People" once lived in China.

Bones were not all that scientists revealed about modern humans' extinct relatives in 2012. For instance, scientists finally put a face on the hobbit, a nickname for a controversial human lineage. Anthropologist Susan Hayes at the University of Wollongong in Australia reconstructed the appearance of the 3-foot (1-meter) tall, 30-year-old female member of the extinct humans officially known as Homo floresiensis, which were first discovered on the remote Indonesian island of Flores in 2003. [Image Gallery: A Real Life 'Hobbit']

DNA extracted from a recently discovered extinct human lineage known as the Denisovans — close relatives of Neanderthals — also revealed new details about this group, which once interbred with modern humans. The Denisovan genome that was sequenced belonged to a little girl with dark skin, brown hair and brown eyes, and displayed about 100,000 recent changes in our genome that occurred after the split from the Denisovans. A number of these changes influenced genes linked with brain function and nervous system development, leading to speculation that we may think differently from the Denisovans.

Genetic analysis also suggested the only modern humans whose ancestors did not interbreed with Neanderthals were apparently sub-Saharan Africans. These findings are just one tidbit regarding the closest extinct relatives of modern humans that was revealed this year. Scientists also found that the unusually powerful right arms of Neanderthals might not have been due to a spear-hunting life as was previously suggested, but rather one often spent scraping animal skins for clothes and shelters. Archaeologists also suggested that Neanderthals and other extinct human lineages might have been ancient mariners, venturing to the Mediterranean Islands millennia before researchers think modern humans arrived at the isles.

Ancient artifacts revealed this year also have shown how tool use has helped humanity reshape the world — and perhaps inadvertently reshape humanity as well.

For instance, ash and charred bone, the earliest known evidence of controlled use of fire, reveal that human ancestors may have used fire 1 million years ago, 300,000 years earlier than thought, suggesting that human ancestors as early as Homo erectus may have begun using fire as part of their way of life. Controlled fires and cooked meat may have influenced human brain evolution, allowing our ancestors to evolve to have larger, more calorie-hungry brains and bodies.

Discoveries involving ancient weapons also revealed that humans learned to make and use these tools far earlier than scientists thought. For instance, what may be ancient stone arrowheads or lethal tools for hurling spearssuggest humans innovated relatively advanced weapons about 70,000 years ago, while a University of Toronto-led team of anthropologists found evidence that humans in South Africa used stone-tipped weapons for hunting 500,000 years ago, which is 200,000 years earlier than previously suggested.

Even the seemingly innocuous discovery this year of the first direct signs of cheesemaking from 7,500-year-old potsherds from Poland might help reveal how animal milk dramatically shaped the genetics of Europe. Most of the world, including the ancestors of modern Europeans, is lactose intolerant, unable to digest the milk sugar lactose as adults. However, while cheese is a dairy product, it is relatively low in lactose. Transforming milk into a product such as cheese that is friendlier to lactose-intolerant people might have helped promote the development of dairying among the first farmers of Europe. The presence of dairying over many generations may then, in turn, have set the stage for the evolution of lactase tolerance in Europe. As such, while cheese might just seem to be a topping on pizza or a companion to wine, it might have changed Western digestive capabilities.

Other clues regarding the diet of ancient relatives also emerged. For example, 2-million-year-old fossils suggest humans' immediate ancestor may have lived off a woodland diet of leaves, fruits and bark, instead of a menu based on the open savanna, as other extinct relatives of humanity did. In addition, fragments of a 1.5-million-year-old skull from a child recently found in Tanzania suggest that later members of the human lineage weren't just occasional carnivores but regular meat eaters, findings that help build the case that meat-eating helped the human lineage evolve large brains.

When it comes to the future of humanity, research this year added to accumulating evidence that natural forces of evolution continue to shape humanity. Church records of nearly 6,000 Finns born between 1760 and 1849 showed that despite humans radically altering their environments with behavior such as farming, human patterns of survival and reproduction were comparable with those of other species.

One researcher at Stanford University has even suggested that humans are getting dumber over time, having lost the evolutionary pressure to be smart once we started living in densely populated settlements several millennia ago. However, other scientists dispute this notion, pointing at geniuses such as Stephen Hawking, and suggest that rather than losing our intelligence, people have diversified, resulting in a number of different types of smarts today.