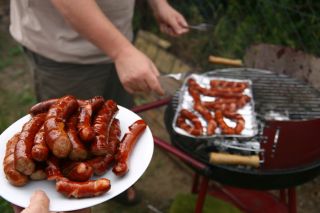 Three out of four U.S. households own a barbecue grill, and when it comes to demonstrating their barbecue prowess, men still dominate the actual cooking, according to the Barbecue Industry Association.
(Image: © © Rafał Fabrykiewicz | Dreamstime.com)

July Fourth is a celebration of outdoor cooking, as well as our nation's birthday. It's time to brush off the barbecue and throw masses of processed meat on the grill. As we all stand around waiting for the fire to die down so that we can make s'mores, it's also a time to ponder the notion that the barbecue is a ritual 700,000 years old or more, and it might have something to do with our big brains. Human ancestors started out eating whatever they could; berries, bark, fruit and bits of small animals were probably the main fare. Anthropologists know these early proto-humans had an eclectic, mostly vegetarian, diet 3 million years ago because of the shape and size of their teeth. These folks had small front teeth and with short canines and giant flat molars, a mouth built for grinding, not for ripping apart hunks of flesh. Around 2.5 million years ago, meat became a big deal. Katherine Milton of the University of California, Berkeley, claims that early humans were forced into this dietary change because the forests of Africa were receding and these hominids simply couldn't get enough plant matter to stay alive. In support of this claim, archaeologists have found 2.5 million year old stone tools clearly used to butcher animals for their flesh and other tools used to smash bones for marrow. For the next few million years, humans apparently stuffed themselves with raw meat. And then somewhere, somehow, somebody offered it up cooked. Maybe there was a forest fire and the early humans stumbled across the charred remains of an antelope and took a bite. Or maybe they lit a fire themselves and while eating a bison dropped a leg into the fire by mistake. In any case, humans switched to cooked meats at least 700,000 years ago, and they never looked back, except for steak tartare. But why bother with all that meal preparation? It takes time and energy to build a fire, invent the frying pan, and then clean up later. Personally, I'd much rather toss my family a raw pork chop or a chicken breast right out of the package than spend all that time with olive oil and rosemary. But that's the point — cooked meat simply tastes better, and our ancestors were apparently instant gourmets. They might also have been selected to go with the cooked over the raw for good evolutionary reasons. Harvard anthropologist Richard Wrangham speculates that controlled fire and cooked meat were implicated in human brain evolution. Wrangham claims that humans actually were cooking their prey as far back as 1.6 million years ago, just when our genus was experiencing major brain expansion. He maintains that cooked meat was still full of protein but easier to digest than raw, and so natural selection might have opted for smaller guts. All that saved digestive energy, Wrangham says, might have then gone into making bigger brains. If Wrangham is right, the big human dietary shift was not so much the move to meat, but the move to cooked meat, which made us smarter and more inventive, so that one human could, millions of years later, perhaps on July Fourth, invent barbecue sauce.