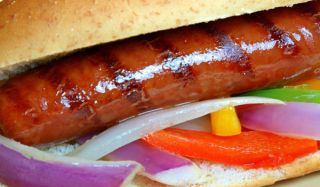 A favorite American pastime and a summer tradition for many, barbecues have a long and surprisingly patriotic history.

They began when a human ancestor called Homo erectus began cooking meat with fire about 1.8 million years ago, according to Planet Barbecue (Workman Publishing, 2010). But barbecues the way that Americans know them now meat cooked over a grill or pit, covered in spices and basting sauce originated in the Caribbean.

The word barbecue comes from the language of a Caribbean Indian tribe called the Taino. Their word for grilling on a raised wooden grate is barbacoa. The word first appeared in print in a Spanish explorer's account of the West Indies in 1526, according to Planet Barbecue.

Since then, the popularity of barbecues has spread like wildfire. The history of barbecuing in America dates to colonial times, and it has been a part of American culture ever since. In fact, one of the first laws enacted in the colony of Virginia during the 1650s forbade the discharge of guns at a barbecue.

When we won the Revolutionary War, laid the cornerstone of the Capitol, and built the first bridge over the Missouri River, the events were commemorated with barbecues, said Steven Raichlen, author of Planet Barbecue and host of Primal Grill on PBS.

Our presidents were known to be big fans of the laid-back pastime as well. George Washington's diaries abound with references to barbecues, including one that lasted for three days.

George Washington was a major barbecue buff, Raichlen told LifesLittleMysteries. When Abraham Lincoln's parents were married, their wedding feast was a barbecue.

Along the way, famous inventors left their mark on the American barbecue: The first commercial charcoal briquet factory was designed by Thomas Edison and built by Henry Ford in 1921, according to Planet Barbecue.

Today, barbecuing plays an especially large role in Southern cuisine, which is notorious for its rich and zesty flavor. For example, the people of Owensboro, Ky., have been barbecuing mutton not delicate lamb, but big, gamey mutton for more than 150 years. It's still a specialty in the town, where it's served with the world's only black barbecue sauce, Raichlen said.