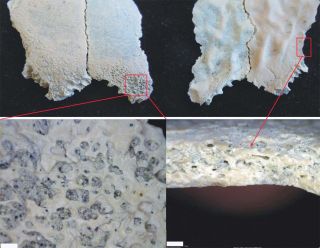 "I know this will sound awful to vegetarians, but meat made us human," said researcher Manuel Domínguez-Rodrigo, an archaeologist at Complutense University in Madrid.

Past research suggested prehuman hominids such as australopithecines may have eaten some meat. However, it is the regular consumption of meat that often is thought to have triggered major changes in the human lineage, the genus Homo, with this high-energy food supporting large human brains.

Given its importance to human evolution, scientists want to learn when eating flesh became a regular activity. Stone tools dating back about 2.6 million years to Gona in Ethiopia are often considered the earliest signs of the human lineage butchering meat, and contentious evidence suggests butchery may have existed at least 3.4 million years ago. "Despite this ample evidence, some archaeologists still argue that meat was eaten sporadically and played a minor role in the diet of those hominins," Domínguez-Rodrigo said. (Hominins include humans and their relatives after they split from the chimpanzee lineage.)

Now shards of a child's skull found in Olduvai Gorge in Tanzania suggest the infant suffered from a form of malnutrition seen in meat-poor diets. This hints that meat-eating was normally a regular part of the human diet at the time. [10 Things That Make Humans Special]

The skull fragment is thought to belong to a child somewhat younger than 2. It remains unclear what hominin it belonged to — likely candidates include extinct human species such as Homo habilis or Homo erectus, or perhaps the "Nutcracker Man" Paranthropus boisei.

The kind of bone lesions the researchers saw in this fossil are known as porotic hyperostosis, which typically results from a lack of vitamins B9 and B12 in the diet. This kind of nutritional deficiency is most common at weaning, when children switch to solid foods. The researchers suggested this particular infant died because of lack of meat, which is rich in B-vitamins. Alternatively, if the child still depended on the mother for milk, it may have been the mother who lacked meat.

However, there are other potential causes for porotic hyperostosis besides malnourishment, such as malaria or parasites. "Basically, anything that correlates with low red-cell count — either due to an infection of the blood or blood loss, or nutritional insufficiency — can cause the marrow of the skull to ramp up its production massively, causing the hyperostosis," said paleoanthropologist John Hawks at the University of Wisconsin, who did not take part in this study.

Still, Hawks noted that Domínguez-Rodrigo and his colleagues took alternative explanations for these bone lesions into account and were reasonably cautious in their interpretation of this data. "This is an interesting addition to what we know," Hawks told LiveScience.

Now, Domínguez-Rodrigo said, "research should try to find out how humans were acquiring meat regularly. What hunting strategies were used?"

The scientists detailed their findings online Oct. 3 in the journal PLoS ONE.