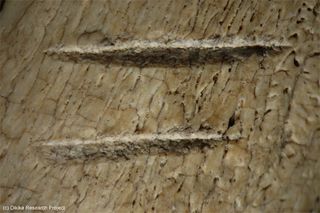 Scientists noticed two parallel cut marks made by stone tools cutting into tissues on the rib of a cow-sized or larger ungulate, suggesting our human ancestors were ripping meat from the bones.
(Image: © Dikika Research Project.)

Humanity's ancestors might not have developed stone tools for butchering animals as early as recent findings suggested, researchers contend.

However, not all scientists agree with these new arguments.

Earlier this year, paleoanthropologist Zeray Alemseged at the California Academy of Sciences at San Francisco and an international team of scientists revealed what seemed to be the earliest known evidence of stone tool use by human ancestors. The rib of a cow-sized animal and the thigh bone of a goat-sized antelope discovered buried in shallow, sandy soil in Dikika, Ethiopia, were marked with cuts, hinting that stone implements were used to remove flesh from the bones and extract the marrow. [Image of rib bone with cut marks]

These bones date back at least 3.4 million years, pre-dating evidence for stone tool use from Gona, Ethiopia, by some 800,000 years. Their discoverers suggested they might well have been made by Australopithecus afarensis, the extinct species that the fossil "Lucy" belonged to, which was known to live in Dikika.

Now, however, a different international team of scientists contends the marks seen on those bones were not made by ancient butchers. Instead, they suggest they are likely scratches made by animals trampling across the bones.

Archaeologist Manuel Dominguez-Rodrigo at Complutense University in Madrid and his colleagues compared images of marks on those bones with previous findings into natural processes that can leave grooves on fossil surfaces and can be mistaken as signs of tool use. They contend the shape and width of the scratches seen on the bones suggests they were abrasions made by trampling of the bones, refuting the past interpretation.

"The interpretation that primitive creatures like Australopithecus with chimp-sized brains were using stone tools at 3.5 million years ago and eating meat from large animals is currently unsupported," Dominguez-Rodrigo told LiveScience. He and his colleagues detailed their findings online Nov. 15 in the Proceedings of the National Academy of Sciences.

Their work supports previous interpretations that meat-eating and stone tool use became important when hominins — those species in the human lineage that came after the split from chimpanzees — "became more intelligent, through the increase of brain, at a time in which savannas in Africa were becoming more arid," Dominguez-Rodrigo said. "Those hominins that were skillful enough to use stone tools for butchery could incorporate a high-quality diet that enabled them to reduce their dentition and initiate the evolution of our genus Homo."

"Research should continue to look for evidence of meat-eating and stone tool use before 2.6 million years ago," Dominguez-Rodrigo added. "But none is available thus far."

Alemseged and his colleagues vigorously disputed this refutation of their work.

"They made these conclusions overlooking the  many obvious marks that matched hominin activity," Alemseged said in an interview. "We made sure that the marks on the Dikika bones were well out of the range of variation for trampling or other agents," Alemseged said.

Archaeologist Shannon McPherron at the Max Planck Institute for Evolutionary Anthropology in Germany, who discovered the Dikika fossils, said that "out of a very large sample of experimentally trampled specimens, they succeed at finding a small subset of the trampled sample that superficially resembles a small subset of the Dikika marks. This, of course, means that they failed to find any trampling damage that resembled the many other stone-tool-inflicted marks on Dikika. Thus, the Dikika sample, as we originally argued, falls outside the range of variation of trampling damage."

Paleolithic archaeologist David Braun at the University of Cape Town in South Africa, who did not take part in either study, said that while he greatly respected Dominguez-Rodrigo and his colleagues, they "did not really convince me that they have definitively identified these marks as trampling damage."

The reason the Dikika marks are so different from other cut marks, Braun told LiveScience, "is probably because they represent a behavior that has not been previously documented." The discoverers of the Dikika fossils "noted that they believe their marks likely represent a behavior of using sharp-edged stones rather than flaked tools," he added. "So it is very likely that they will produce marks that are different."

"Recent experiments reported in a paper now under review show that the Dikika marks are a tight fit to marks produced by unflaked stone," McPherron added.

Also, Dominguez-Rodrigo and his collaborators demonstrated a technique in a recent study that could measure how confident they were that marks seen on bones were made either by trampling or cuts, and "for some reason did not apply this methodology to the marks from Dikika," Braun said.

Although no stone tools that might have made such marks were found at the Dikika site, "when you're a hominin that's just starting to use stone tools, it wouldn't be surprising that such use would be sporadic," Alemseged said. , As such, they might not be found together with the bones they helped butcher, "so they would be almost invisible in the archaeological record."

Still, "when forensic anthropologists study gunshot victims, they don't need to find the gun or the bullet to know they've been shot. Finding the tools is absolutely a point for future research though," Alemseged said.

The findings of Dominguez-Rodrigo and his colleagues suggest "the study of cut marks needs to move into a quantitative assessment of the three-dimensional morphology of the marks," Braun said. "This is the only way I can see some type of resolution in this work." He noted that recently scientists have begun to do so by applying three-dimensional mapping techniques to microscopic surfaces.

"I think we have opened up a new and important research window that is going to enable researchers to find more evidence supporting our work at different sites," Alemseged said. "Many researchers will now carefully examine  fossils from sites older than 3 million or 2.6 million years old, hitherto almost ignored from the archeological perspective."