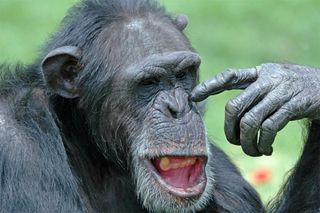 Chimps and apes are genetically so similar to humans - and their human-like gestures do remind us how close we are on the family tree - that scientists have long been puzzled why they don't live as long as we do. Diet-related evolutionary changes may explain it. Image
(Image: © stockexpert.)

Genetic changes that apparently allow humans to live longer than any other primate may be rooted in a more carnivorous diet.

These changes may also promote brain development and make us less vulnerable to diseases of aging, such as cancer, heart disease and dementia.

Chimpanzees and great apes are genetically similar to humans, yet they rarely live for more than 50 years. Although the average human lifespan has doubled in the last 200 years — due largely to decreased infant mortality related to advances in diet, environment and medicine — even without these improvements, people living in high mortality hunter-forager lifestyles still have twice the life expectancy at birth as wild chimpanzees do.

These key differences in lifespan may be due to genes that humans evolved to adjust better to meat-rich diets, biologist Caleb Finch at the University of Southern California in Los Angeles suggested.

The oldest known stone tools manufactured by the ancestors of modern humans, which date back some 2.6 million years, apparently helped butcher animal bones. As our forerunners evolved, they became better at capturing and digesting meat, a valuable, high-energy food, by increasing brain and body size and reducing gut size.

One variant found in all modern human populations, known as ApoE3, emerged roughly 250,000 years ago, "just before the final stage of evolution of Homo sapiens in Africa," Finch explained.

ApoE3 lowers the risk of most aging diseases, specifically heart disease and Alzheimer's, and is linked with an increased lifespan.

"I suggest that it arose to lower the risk of degenerative disease from the high-fat meat diet they consumed," Finch told LiveScience. "Another benefit is that it promoted brain development."

Curiously, another more ancient variant of apolipoprotein E found in a lesser degree in all human populations is ApoE4, which is linked with high cholesterol, shortened lifespan and degeneration of the arteries and brain.

"The puzzle is, if ApoE4 is so bad, why is it still present?" Finch asked. "It might have some protective effects under some circumstances. A little bit of data suggests that with hepatitis C, you have less liver damage if you have ApoE4."

Finch detailed these findings in the December issue of Proceedings of the National Academy of Sciences Early Edition.