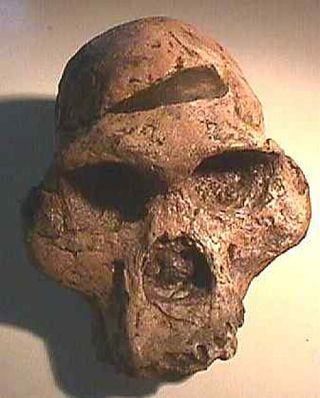 A skull of Australopithecus africanus. A. africanus lived in Southern Africa between 2 million and 3 million years ago and ate mostly soft foods like fleshy fruits, leaves and meat.
(Image: © Two Guys Fossils.)

By examining microscopic marks on fossilized teeth, scientists have pieced together the diets of two ancient prehumans.

The small, slender Australopithecus africanus, which lived between two and three million years ago, appear to have eaten mostly soft foods like fleshy fruits, young leaves and perhaps some meat.

Paranthropus robustus was about the same size as A. africanus, but lived about two million years ago and had much larger, flatter teeth, a thicker jaw and bigger, heavier chewing muscles. Its teeth showed the signs of harder, more brittle foods like nuts, seeds, roots and tubers -- the types of food that grow in the open savannah.

But P. robustus also showed signs of having eaten the softer foods enjoyed by A. africanus, possibly explaining how P. robustus survived in the savannah.

"In the same way there's a lot of overlap between chimpanzees and gorillas -- their anatomy is different, but most of the time they eat the same foods when they live together," said study author Peter Ungar of the University of Arkansas. "The only times they differ are during times of resource stress. They fall back on other foods when those soft, sugary foods are unavailable. Gorillas shift to tough leaves and sticks when they need to because their anatomy allows it."

For years researchers had believed P. robustus was a hard foods specialist because its facial anatomy suggested so. Now, Ungar's research shows that P. robustus had a varied diet, and that "these differences in anatomy were being driven by only a small, but critical amount of time.

"All these early hominids probably preferred to eat fruits -- they taste good and are high in energy," Ungar said. "I would say that probably both would take meat when they could get it, similar to chimpanzees today."

To determine the diets of these ancient hominids, Ungar compared fossil teeth to the teeth of modern day primates with known diets. Different foods make different grooves and patterns on teeth, so it is possible to figure out an animal eats by looking at these patterns.

To do this, Ungar and his colleagues used a special microscope and computer program to analyze microscopic tooth wear.

"This new technique cuts out observer error and allows us to look at variation and overlap between species," Ungar said.

The research is detailed in the Aug. 4 issue of the journal Nature.