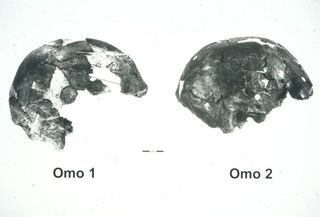 A new analysis of two human skulls previously found in Africa shows they date from nearly 200,000 years ago, making them the oldest known examples of our species.

The finding suggests our ancestors spent a long, long time wallowing in an uncultured era with no music, art or jewelry.

The fossils were found near Kibish, Ethiopia in 1967. Scientists had previously thought they were no more than 160,000 old. The new analysis of rocks in which the skulls were embedded shows them both to date back 195,000 years, give or take 5,000.

"It pushes back the beginning of anatomically modern humans," said University of Utah geologist Frank Brown.

The analysis is detailed in the Feb. 17 issue of the journal Nature.

Fossil records suggest musical instruments, drawings, needles and other sophisticated tools -- with the exception of crude stone blades -- did not appear until about 50,000 years ago.

"Which would mean 150,000 years of Homo sapiens without cultural stuff," Brown said.

But evidence of culture is murky.

"There is a huge debate in the archeological literature regarding the first appearance of modern aspects of behavior such as bone carving for religious reasons, or tools (harpoons and things), ornamentation (bead jewelry and such), drawn images, arrowheads," said anthropologist John Fleagle of New York state's Stony Brook University, another member of the study team. But, he adds, "they only appear as a coherent package about 50,000 years ago, and the first modern humans that left Africa between 50,000 and 40,000 years ago seem to have had the full set."

The new analysis seems to mesh with other studies that estimate the emergence of humans around 200,000 years ago.

"It makes the dates in the fossil record almost exactly concordant with the dates suggested by genetic studies for the origin of our species," Fleagle said.

The two ancient skulls are called Omo I and Omo II for the Omo River near which they were found.

Interestingly, though the bones of the two heads appeared to be from the same time period, Omo II is more primitive in appearance. This suggests that "when modern humans first appeared there were other contemporary populations that were less modern," the researchers report.

Led by Ian McDougall of the Australian National University, the researchers examined the Omo River site from 1999 through 2003. They picked up more Omo I bones, including an upper leg bone. They analyzed soil layers and used radioactive gases, which decay at known rates, to put a date to the layers in which the fossils were found.

Paul Renne, director of the Berkeley Geochronology Center, which specializes in dating rocks, said the researchers made "a reasonably good argument'' to support their dating of the fossils. "It's more likely than not,'' Renne said, calling the work "very exciting and important.''

Human ancestors go back as far as 6 million years, according to the overall fossil record. The genus Homo arose at least 1.8 million years ago, scientists believe, when australopithecines evolved into human ancestors known as Homo habilis, which had larger brains but never grew larger than a 12-year-old child of today.

Early Homo sapiens developed even larger brains, were taller, and had straighter arms and legs.

The Associated Press contributed to this report