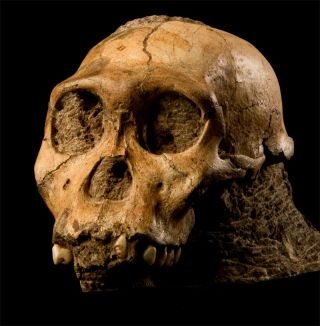 The teeth of what may be humanity's immediate ancestor, Australopithecus sediba (skull from a male juvenile shown here), revealed the species likely lived off a woodland diet rather than the grasses of an open savanna.
(Image: © Lee Berger)

The immediate ancestor of the human lineage may have lived off a woodland diet of leaves, fruits and bark instead of a menu based on the open savanna as other extinct relatives of humanity did, researchers say.

Food was a major environmental force that shaped the human lineage – perhaps influencing key moments such as when humans' ancestors started walking upright – and these new findings help reveal the complex evolutionary paths these ancestors took in response to the world around them, the scientists add.

The findings are based on fossils of the extinct hominin Australopithecus sediba that were accidentally discovered in 2008 by the 9-year-old son of a scientist in the remains of a cave in South Africa. The fossils were 2 million years old.

A hominin is the lineage that includes humans and their relatives after they split from those of chimpanzees.  Australopithecus means "southern ape" and is a group that includes the iconic fossil Lucy, while sediba means "wellspring" in the South African language Sotho. This hominin's mix of human and primitive traits has made a strong case for it being the immediate ancestor of the human lineage. [Image Gallery: Our Closest Human Ancestor]

Scientists can gauge what our ancient relatives might have eaten by looking at their teeth, particularly the marks and remnants left on them by food. They also can look at the carbon isotopes making up fossils; the grasses that dominate savannas engage a kind of photosynthesis that involves both normal carbon-12 and heavier carbon-13, while trees and shrubs rely on a kind of photosynthesis that prefers carbon-12.

By analyzing two fossil specimens, researchers found that the diet of Au. sediba apparently differed substantially from those of most other extinct species of hominins studied to date.

Carbon isotopes from the remains suggest Au. sediba ate nearly completely woodland diets, comparable to forest specialists such as giraffes. In addition, tiny fragments of a diverse range of plant tissues, including bark and wood, were found in the teeth of one of the individuals.

"There is more variety in our past than we expected," said researcher Amanda Henry, a paleoanthropologist at the Max Planck Institute for Evolutionary Anthropology in Leipzig, Germany. "We're seeing more variation among the diets and behaviors of early hominins than we'd previously seen."

The findings suggest "there wasn't a single, straight line from an early, primitive hominin to us," Henry told LiveScience. "Many of our ancestors and relatives branched out, tried new things and generally worked at doing what was best in their environment at that particular time."

Henry and her colleagues are now looking for remnants of food stuck in the teeth of other extinct hominins. They detailed their findings online June 27 in the journal Nature.