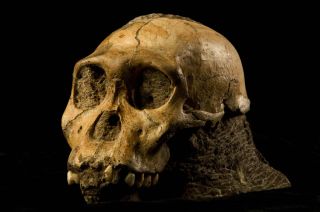 Fossils of the extinct hominid known as Australopithecus sediba were accidentally discovered by the 9-year-old son of a scientist in the remains of a cave in South Africa in 2008, findings detailed by researchers last year. The fossils' mix of human and primitive traits found in the brains, hips, feet and hands make a strong case for it being the immediate ancestor to the human lineage, scientists report in the Sept. 9, 2011, issue of the journal Science. The fossils included remains of a male juvenile (whose cranium is shown here) along with a female of the same species, who was likely in her 20s or 30s.
(Image: © Brett Eloff. Picture courtesy of Lee Berger and the University of Witwatersrand)

A startling mix of human and primitive traits found in the brains, hips, feet and hands of an extinct species identified last year make a strong case for it being the immediate ancestor to the human lineage, scientists have announced.

These new findings could rewrite long-standing theories about the precise steps human evolution took, they added, including the notion that early human female hips changed shape to accommodate larger-brained offspring. There is also new evidence suggesting that this species had the hands of a toolmaker.

Fossils of the extinct hominid known as Australopithecus sediba were accidentally discovered by the 9-year-old son of a scientist in the remains of a cave in South Africa in 2008, findings detailed by researchers last year. Australopithecus means "southern ape," and is a group that includes the iconic fossil Lucy, while sediba means "wellspring" in the South African language Sotho. [See images of human ancestor]

Two key specimens were discovered — a juvenile male as developed as a 10- to 13-year-old human and an adult female maybe in her late 20s or early 30s. The species is both a hominid and a hominin — hominids include humans, chimpanzees, gorillas and their extinct ancestors, while hominins include those species after Homo, the human lineage, split from that of chimpanzees.

To begin to see where Au. sediba might fit on the family tree, researchers pinned down the age of the fossils by dating the calcified sediments surrounding them with advanced uranium-lead dating techniques and a method called paleomagnetic dating, which measures how many times the Earth's magnetic field has reversed. They discovered the fossils were approximately 1.977 million years old, which predates the earliest appearances of traits specific to the human lineage Homo in the fossil record. This places Au. sediba in roughly the same age category as hominids such as Homo habilis and Homo rudolfensis, which were thought to be potential ancestors to Homo erectus, the earliest undisputed predecessor of modern humans. [10 Things That Make Humans Special]

"As the fossil record for early human ancestors increases, the need for more accurate dates is becoming paramount," said researcher Robyn Pickering at the University of Melbourne in Australia.

Most aspects of Au. sediba display an intriguing mix of both human and more primitive features that hint it might be an intermediary form between Australopithecus and Homo.

"The fossils demonstrate a surprisingly advanced but small brain, a very evolved hand with a long thumb like a human's, a very modern pelvis, but a foot and ankle shape never seen in any hominin species that combines features of both apes and humans in one anatomical package," said researcher Lee Berger, a paleoanthropologist at the University of Witwatersrand in Johannesburg, South Africa. "The many very advanced features found in the brain and body and the earlier date make it possibly the best candidate ancestor for our genus, the genus Homo, more so than previous discoveries such as Homo habilis."

The brain is often thought of as what distinguishes humanity from the rest of the animal kingdom, and the juvenile specimen of Au. sediba had an exceptionally well-preserved skull that could shed light on the pace of brain evolution in early hominins. To find out more, the researchers scanned the space in the skull where its brain would have been using the European Synchrotron Radiation Facility in Grenoble, France; the result is the most accurate scan ever produced for an early human ancestor, with a level of detail of up to 90 microns, or just below the size of a human hair.

The scan revealed Au. sediba had a much smaller brain than seen in human species, with an adult version maybe only as large as a medium-size grapefruit. However, it was humanlike in several ways — for instance, its orbitofrontal region directly behind the eyes apparently expanded in ways that make it more like a human's frontal lobe in shape. This area is linked in humans with higher mental functions such as multitasking, an ability that may contribute to human capacities for long-term planning and innovative behavior.

"We could be seeing the beginnings of those capabilities," researcher Kristian Carlson at the University of Witwatersrand told LiveScience.

This mosaic of modern and primitive traits held true with its hips as well. An analysis of the partial pelvis of the female Au. sediba revealed that it had modern, humanlike features.

"It is surprising to discover such an advanced pelvis in such a small-brained creature," said researcher Job Kibii at the University of the Witwatersrand.  "It is short and broad like a human pelvis ... parts of the pelvis are indistinguishable from that of humans."

Scientists had thought the human-like pelvis evolved to accommodate larger-brained offspring. The new findings of humanlike hips in Au. sediba despite small-brained offspring suggests these pelvises may have instead initially evolved to help this hominin better wander across the landscape, perhaps as grasslands began to expand across its habitat.

When it came to walking, investigating the feet and ankles of the fossils revealed surprises about how Au. sediba might have strode across the world. No hominin ankle has ever been described with so many primitive and advanced features.

"If the bones had not been found stuck together, the team may have described them as belonging to different species," said researcher Bernhard Zipfel at the University of the Witwatersrand.

The  researchers discovered that its ankle joint is mostly like a human's, with some evidence for a humanlike arch and a well--efined Achilles tendon, but its heel and shin bones appear to be mostly ape-like. This suggested the hominid probably climbed trees yet also walkid in a unique way not exactly like that of humans.

Altogether, such anatomical traits would have allowed Au. sediba to walk in perhaps a more energy-efficient way, with tendons storing energy and returning that energy to the next step, said researcher Steve Churchill from Duke University in Durham, N.C. "These are the kinds of things that we see with the genus Homo," he explained.

Finally, an analysis of Au. sediba's hands suggests it might have been a toolmaker. The fossils — including the most complete hand known in an early hominin, which is missing only a few bones and belonged to the mature female specimen — showed its hand was capable of the strong grasping needed for tree-climbing, but that it also had a long thumb and short fingers. These would have allowed it a precision grip useful for tools, one involving just the thumb and fingers, where the palm does not play an active part.

Altogether, the hand of Au. sediba has more features related to tool-making than that of the first human species thought of as a tool user, the "handy man" Homo habilis, said researcher Tracy Kivell at the Max Planck Institute for Evolutionary Anthropology in Germany. "This suggests to us that sediba may also have been a toolmaker."

Though the scientists haven't excavated the site in search of stone tools, "the hand and brain morphology suggest that Au. sediba may have had the capacity to manufacture and use complex tools," Kivell added.

The researchers do caution that although they suggest that Au. sediba was ancestral to the human lineage, all these apparent resemblances between it and us could just be coincidences, with this extinct species evolving similar traits to our lineages due, perhaps, to similar circumstances. [Top 10 Missing Links]

In fact, it might be just as interesting to imagine that Au. sediba was not directly ancestral to Homo, because it opens up the possibility "of independent evolution of the same sorts of features," Carlson said. "Whether or not it's on the same lineage as leading to Homo, I think there are interesting questions and implications."

The scientists detailed their findings in the Sept. 9 issue of the journal Science.