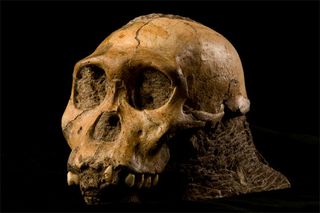 The cranium of the newly identified species, Australopithecus sediba, was found at the Malapa site, South Africa.
(Image: © Photo by Brett Eloff courtesy of Lee Berger and the University of the Witwatersrand.)

A shrunken brain may potentially lie inside the fossil skull of a newfound candidate for the immediate ancestor to the human lineage, researchers now reveal.

This new species, dubbed Australopithecus sediba, was accidentally discovered in South Africa by the 9-year-old son of a scientist. Two members of this hominid were introduced to the world last week — a juvenile male and an adult female, who might have known each other in life and who could have met their demise by falling into the remains of the cave where they were discovered.

Preliminary results from scans of the extraordinarily preserved male skull now show the presence of what could be fossilized insect eggs and a brain remnant.

The hominid skull was mostly kept in the stone matrix it was found in. This helps keep the fragile fossil intact and also preserves anything that might be left inside.

To scan the fossil without breaking it open, researchers used X-rays generated at the European Synchrotron Radiation Facility in Grenoble, France. The energy range and image resolution from the X-rays generated at this synchrotron — a kind of particle accelerator, or atom smasher — are far greater than that of conventional X-ray machines, capable of details going down to 700 nanometers, equal to a wavelength of red light.

An extensive two-week long investigation generated some 15 terabytes of raw data, which once processed would result in a total of 45 terabytes or more final data. That is equal roughly to half as much data as collected in the U.S. Library of Congress.

Soft parts of the body normally do not fossilize. Still, an extended low-density area in the rock still inside the skull could suggest brain tissue after bacterial decay.

"We saw this cavity near the frontal part inside the skull that had a strange shape," said researcher Paul Tafforeau, a paleoanthropologist at the European Synchrotron Radiation Facility.

"One way to explain that cavity is that when this individual died, it was mummified, and the mummification made the brain shrink by losing water, leading to an odd shape," Tafforeau said. "Later you had water with sediment come up, fossilizing the individual and filling the brain case, but you still had that brain remnant inside."

If it is a shrunken brain, it is perhaps one-twentieth of its original size of 420 and 450 cubic centimeters, which was already small when compared to the human brain of about 1,200 to 1,600 cubic centimeters. The shrinkage would make teasing apart its original structure virtually impossible, and the possibility of it holding any useful amounts of protein, DNA or other biomolecules is slim.

"It's quite an unexpected discovery, but for the moment, I'm not sure we can find any important information in it," Tafforeau said. "I hope that I'm wrong. It's too early to say."

Scans of the fossil's teeth to look at internal growth lines and structure could provide the precise age at death of the individual.

"In ape teeth, about 3 to 4 microns of enamel is deposited every day on a growing tooth, so each day, you get one line about that thick," Tafforeau said. "By counting the lines, you can directly count the number of days they were alive."

By comparing his real age and his developmental level, which is roughly equivalent to that of a 13-year-old modern human, scientists can shed light on the pattern of his life history.

"The rate of development is extremely important when it comes to the evolution of hominids," Tafforeau explained. Modern humans have an extremely slow life history that is key to the development of our brains, while australopithecines such as Lucy had more rapid ones more like that of chimpanzees.

"The aim of the study of the teeth will be to see if Australopithecus sediba is still developing like other australopithecines or if its development is already showing a tendency toward Homo genus" Tafforeau said, referring to the human lineage.

Eggs and other clues

Three fossilized insect eggs, each about a tenth of an inch (two or three millimeters) large, were seen within the skull, potentially hatching larvae that fed on the flesh of the hominid after death, researchers added. Two eggs belonged to wasps and apparently had already hatched, while the third, a fly egg, remained unopened.

In addition to the skull, many fragments of the skeleton, representing nearly 40 percent of an entire body, were also analyzed. "We can use that data to create biomechanical models to help reconstruct their locomotion, to see if they went climbing in trees or walking on the floor," Tafforeau said.

This is only the second time ever that a complete skull of a hominid was examined using powerful synchrotron radiation, with the first being the 6.5-to-7.5-million-year-old human-like, chimp-like biped "Toumai." They hope to one day scan the other A. sediba fossil skeleton, that of an adult female.

"We didn't scan them both for security reasons — being a new species, it was unacceptable to have them both traveling together at the same time, as you could imagine a plane crashing and losing them both," Tafforeau said. "We will definitely focus on the female too."