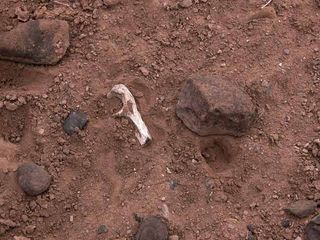 This fragment of a lower arm bone represents just one piece of the second partial skeleton of science's best-known early human ancestor. It's 400,000 years older than the famed hominid "Lucy," which is the same species, and it's male.
(Image: © Yohannes Haile-Selassie, Cleveland Museum of Natural History)

The discovery of a new hominid skeleton in Ethiopia shows that the human ancestor represented by the famed "Lucy" walked on two legs rather than moving like a knuckle dragger, researchers say.

Anthropologists have long debated whether the short-statured female Lucy typically walked upright or not. She had represented the only known skeleton of Australopithecus afarensis, and would have stood at a height of 3.5 feet (about a meter) some 3.2 million years ago.

But the second partial skeleton, named "Kadanuumuu" ("big man" in the Afar language), has both the shoulders and long legs that compare well to modern humans, according to Yohannes Haile-Selassie, curator and head of physical anthropology at the Cleveland Museum of Natural History in Ohio.

"It's only the second partial skeleton of A. afarensis to be recovered; it's 400,000 years older than Lucy and it's male," Haile-Selassie said. "But just as important, the fossil remains provide conclusive proof that A. afarensis could walk upright freely without the use of its hands."

Kadanuumuu lived even earlier than Lucy around 3.6 million years ago, but would have towered over the smaller female at a height of 5 to 5.5 feet (1.5 to 1.7 m) tall. His legs and arms look proportionally similar to that of modern humans.

The new skeleton contains most of the parts found in Lucy, along with previously unknown pieces, such as much of the rib cage and a nearly complete adult shoulder blade.

"Kadanuumuu's shoulder was also a major discovery," Haile-Selassie noted. "It shows that our ancestor's shoulder blade and rib cage were much more similar to those of modern humans than previously had been thought."

The older, bigger brother to Lucy appears to match well with fossilized footprints that also date back to 3.6 million years ago in Laetoli, Tanzania. That eastern African site shows that early human ancestors regularly walked upright, without knuckle-dragging impressions or unusually spread toes.

Later excavations by an international team between 2005 and 2008 turned up an upper arm, collarbone, neck bones, ribs, pelvis, sacrum, a thighbone, a shinbone and the shoulder blade. The discoveries came as part of the Woranso-Mille Project that has been ongoing since 2004.

Researchers published their early findings in this week's issue of the journal Proceedings of the National Academy of Sciences, and hope to continue revealing more about the skeleton officially designated KSD-VP-1/1.