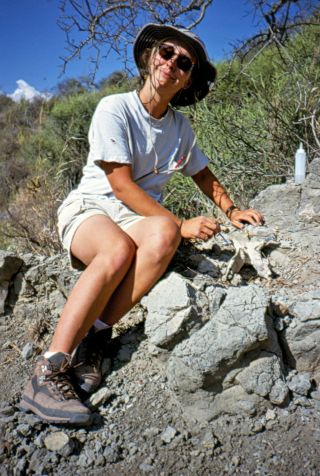 Sandi Copeland is a paleoanthropologist who investigates the "lifeways" — everyday customs and lives — of early hominins (human ancestors) using strontium isotopes and modern plant food distributions in Africa. She is a visiting assistant professor at the University of Colorado Denver, and has held positions at the University of Colorado Boulder, the Max Planck Institute for Evolutionary Anthropology in Germany, and Los Alamos National Laboratory in New Mexico. The element strontium occurs in bedrock at unique isotopic ratios and gets passed into soils, plants and animals in a given area. By measuring strontium isotope ratios in teeth, one can identify the bedrock source, and therefore the approximate location in which an animal grew up. Copeland applied this method to 2 million-year-old hominins from South Africa and found the first direct evidence of social behavior: males remained in their home territory for life, while females, upon maturity, moved away from home to join new communities. Copeland has also investigated what role plant foods may have played in the lives of early hominins by studying modern wild plant foods around the savannas of the Serengeti and other parts of Africa. She participated in excavations at Olduvai Gorge in Tanzania, where direct evidence of ancient plant-food use is fleeting. Copeland's research into early hominin landscape use continues with new strontium isotope projects in South Africa and Tanzania.

What inspired you to choose this field of study? My love of playing in the dirt, working outside and travel to exotic places definitely helped steer my career path toward paleoanthropology. As a child, I often read through the book "Early Man" from the Time-Life series (by F. Clark Howell, published by Silver Burdett Press, 1987), and that had a strong influence on me. Travels to Europe with my family also gave me an early awareness of differences between cultures, and this sparked my interest in anthropology. My overriding inspiration, however, has been the desire to understand how humans fit into the broader picture of life, evolution, geological time and earth history.

What is the best piece of advice you ever received? It was probably the guidance of my high school teacher, Leila Parrish. She encouraged me not to get caught in the trap of believing what society sometimes impresses upon girls — that is, that someone else will always take care of them — but instead to pursue independence and a career. Taking risks and putting myself in uncomfortable situations, such as my first weeks of independent fieldwork alone in Tanzania, means that life is very challenging — but in the end it proves to be extremely rewarding.

What was your first scientific experiment as a child? This isn't really an experiment, but in seventh grade I chose to do my science report on human evolution using the "Early Man" book as my main reference. I remember one of my classmates saying, "you don't really think humans evolved from monkeys, do you?"

What is your favorite thing about being a researcher? It is thrilling to discover something that no one else has discovered before, whether it is an actual fossil or the result of an isotopic analysis of fossils. Of course field work is fun, but it is perhaps even more rewarding when the data are finally analyzed and organized in such a way that the results can be viewed in the form of graphs. The fun is finding the patterns in the graphs.

What are the societal benefits of your research? The societal benefits of the study of human evolution are indirect, but are very important. My research helps to illuminate exactly why human biology, behavior and cultural traditions are what they are today, and this in turn influences the perspective from which individuals view themselves, their society, other societies and the world. One of the main goals I have when teaching is for my students to come away with an understanding of how humans are part of — not separate from — the ecosystems of the world. Such a perspective helps people to appreciate other cultural traditions, conservation of natural resources and the environment, and the enormous amount of invaluable information that we can gain from our few remaining great ape relatives that still live in the wild.

What about your field or being a researcher do you think would surprise people the most? Paleoanthropology is a surprisingly multidisciplinary field, which requires expertise not only in archaeology and biological anthropology, but also in geology, chemistry, ecology, paleontology and other fields.

If you could only rescue one thing from your burning office or lab, what would it be? Since my laptop has a backup in my home, I would rescue my original field notebooks from my burning office. I often have cause to go and look for things in them that cannot be found in computer data files. That reminds me … I should photocopy them.

What music do you play most often in your lab or car? Recently I have taken to listening to NPR talk radio whenever I'm in my car alone, which is the only chance I have to listen to the radio. More often, my small child is with me in the car, in which case we sing our own songs.