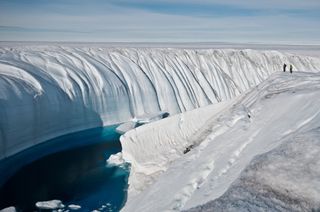 SAN FRANCISCO — Arctic glaciers retreated at record levels in 2012, while summer snow melted in the region much more rapidly than it has in the past, according to a new report by the National Oceanic and Atmospheric Association (NOAA).

The findings, presented here Wednesday (Dec. 5) at the annual meeting of the American Geophysical Union, are part of the annual "Arctic Report Card," which was assembled by more than 140 scientists to assess the state of the North Pole.

The report found that Greenland's Arctic sea ice and glaciers were melting at a record rate and that sea-level rise has accelerated in the region. That has caused a population boom in lower-level organisms such as plankton, but has disrupted the life cycles of animals ranging from lemmings to the Arctic fox.

But the impacts of the warming Arctic may reach beyond the northern latitudes, said Jane Lubchenco, the undersecretary of commerce for oceans and the atmosphere for NOAA, during a press conference.

"What happens in the Arctic doesn't always stay in the Arctic. We're seeing Arctic changes in the ocean and the atmosphere that affect weather patterns elsewhere," she said.

And September sea-ice extent — the area of water with at least 15 percent sea ice — throughout the Arctic is the lowest on record (which dates to 1979), beating the previous record set in just 2007.

"The 40 largest glaciers lost an area about twice that of the previous decade average," he said. "Extensive surface melting was documented for the first time at the highest elevations of the ice sheet." [Images of Melt: Earth's Vanishing Ice]

In addition, the higher melting has reduced the reflectivity of the ice surface, causing land areas to absorb more heat, which causes more melt in a self-reinforcing cycle, he said.

Summer snowmelt in the Northern Hemisphere also accelerated further decreasing the reflectivity of the land — as snow reflects more sunlight back to space than exposed land — and causing the land to trap more heat in a positive feedback cycle.

All this warming has caused a change in the organisms that live in the North, said Martin Jeffries, a geophysicist at the University of Alaska and an editor of the report card.

"Unexpectedly large phytoplankton blooms have been observed this summertime," Jeffries said. Prior estimates of how much plankton was blooming may have been 10 times too low, he added.

In areas near melting sea ice, the tundra's permafrost, or permanently frozen soil, is also greening, with a longer summer season and warmer summers, he said. Permafrost temperatures 66 feet (20 meters) below the surface were the highest on record at eight of 10 observatories in Alaska, and matched the 2011 records at two sites.

That soil warming is affecting some of the iconic species of the Arctic, such as the lemmings or small rodents, whose life cycles are getting more chaotic and unpredictable, Jeffries said. Warming weather has also increased pressure on the Arctic fox, which relies on the lemming as its main food source.

"The larger red fox has been expanding its range northward, leading to predation on and competition with the Arctic fox for food and resources," he said.

These changes could impact areas other than the Arctic, Lubchenco said.

"We know that melting ice in Greenland can contribute to sea-level rise around the world, and many of the biological changes we are seeing around the world affect systems elsewhere, for instance migratory birds."

For instance, rising sea levels may have contributed to record surge heights along the U.S. coastline during Hurricane Sandy, Lubchenco told LiveScience.