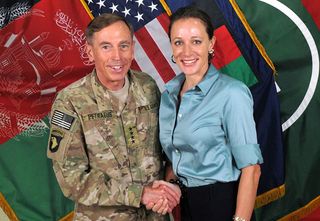 There are a lot of unanswered questions about the resignation of former CIA Director David Petraeus and the ever-widening scandal surrounding it, but one of them seems to be a pretty simple matter of semantics: What is an "unpaid social liaison?"

That phrase has been used by the Associated Press and many news outlets to describe Jill Kelley, the 37-year-old Tampa resident whose complaint to the FBI about receiving harassing emails led to the investigation of Petraeus. "[Kelley] serves as an unpaid social liaison to MacDill Air Force Base in Tampa, where the military's Central Command and Special Operations Command are located," reported AP.

Most news accounts don't elaborate on what Kelley's position entails, but her efforts reportedly earned her commendation. "A U.S. official said the coalition countries represented at Central Command gave Kelley an appreciation certificate on which she was referred to as an 'honorary ambassador' to the coalition, but she has no official status and is not employed by the U.S. government," according to the AP.

So what does Kelley do as an unpaid social liaison, and how did she earn her "honorary ambassador" status?  [Why Men Like Petraeus Risk It All to Cheat]

Life's Little Mysteries spoke to a military spokesman, who asked not to be identified, to try to officially clear up the unofficial matter. While his responses didn't definitively solve anything, his analysis was still instructive. Some of the conversation is reproduced below.

What does being an unpaid social liaison entail?

Spokesperson: I don't think it entails anything. Someone does some nice things for people, and then they give them a piece of paper and a gift and say thank you.

Are there other unpaid social liaisons in Central Command or is Kelley the only one?

How and why would the decision to bestow an "honorary ambassador" status on Kelley have been made?

Spokesperson: They probably said, "Hey, this nice lady hosted several parties we were at. We had a lot of fun and she seems really nice and does things to help us out, so let's give her a certificate and make her an honorary ambassador to the coalition." Someone typed it up, someone hit print and that was it.

In the hypothetical situation proposed in the previous answer, who is the "we" who had fun at Kelley's parties and decided to thank her?

Spokesperson: I would imagine that it's senior officers within the coalition, meaning the non-U.S. members who assist in CentCom.