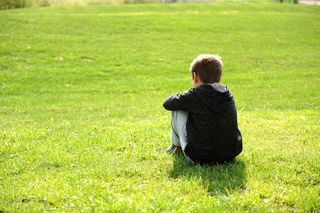 People with autism have difficulties with social interactions. In a new study, the hormone oxytocin shows boosting effects on the brain regions that process social information.
(Image: © Shutterstock)

For children with autism, a dose of oxytocin — the so-called "love hormone" — seems to fine-tune the activity in brain areas linked to social interactions, according to a new study.

Although the hormone didn't change children's social skills in the study, its boosting effect on the brain's social areas suggests that using oxytocin nasal sprays immediately before behavioral therapies could boost the effects of those treatments, the researchers said.

The study involved 17 children and teens with autism spectrum disorders who underwent two sessions of brain imaging as they performed a task related to social behavior. In each session, the participants received either oxytocin nasal spray or a placebo, and were asked to judge the mental states of people based on a picture of their eyes.

The results showed that, compared with placebo sessions, when children received oxytocin they showed greater activity in the "social brain," which includes regions that process social information and are linked to reward, social perception and emotional awareness.

In contrast, oxytocin seemed to decrease the activity of the brain's social regions when children were engaged in a task that was not related to social processing, such as labeling the category of vehicles shown in pictures of cars.

In other words, the hormone seemed to help attune the brain to the difference between social and nonsocial stimuli, according to the study, published today (Dec. 2) in the journal Proceedings of the National Academy of Sciences.

However, Gordon said the findings do not mean that one dose of the hormone would treat social deficits in people with autism. "It means that there's a change in the brain that we read as positive and exciting, but we need to learn how to utilize it to create a change in real-life behavior," she said.

Oxytocin is a hormone produced in the brain, and is thought to be involved in various aspects of social interaction, such as emotional bonding, trust and love.

However, studies that examined the behavioral effects of administrating oxytocin yielded negative or weak results. In those studies, researchers gave the hormone to adults and children with autism for days and weeks, and found only modest improvements, or no change at all, in participants' social behavior.

Similarly, in the new study, when children received oxytocin, they didn't perform any better in identifying mental states based on their assessment of a person's eyes. But the greater activity in the brain's social regions after they received the hormone suggests that it may improve the effectiveness of behavioral treatments.

"There's a window where the brain increases its efficiency in processing, and we can utilize that window to teach kids on the autism spectrum in behavioral treatment," Gordon told LiveScience.

It remains unclear how the hormone affects the brain and leads to better social processing. One possibility is that oxytocin makes social stimuli more rewarding to children with autism, the researchers said. It is also possible that the hormone makes the information pertaining to humans stand out from the background information consisting of objects and, in turn, helps social information to become salient to people with autism, the researchers said.