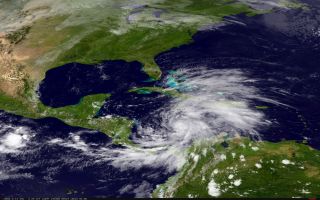 The GOES East satellite captured this view of Tropical Storm Sandy over the Caribbean Sea on Oct. 23, 2012, as it headed towards a strike on Jamaica.
(Image: © NOAA.)

Update, 3:35 p.m. EDT: Hurricane Sandy has made landfall over Jamaica.

Tropical Storm Sandy has strengthened into Hurricane Sandy over the Caribbean Sea, just before it is expected to hit Jamaica later today (Oct. 23).

The U.S. National Hurricane Center (NHC) noted the change in Sandy's strength in their 11 a.m. EDT update, noting that the hurricane has maximum sustained winds of 80 mph (130 kph), as measured by hurricane hunter aircraft. The threshold for hurricane strength is 74 mph (119 kph).

Hurricane Sandy is the 10th hurricane of the 2012 Atlantic hurricane season, which was expected to see only between five and eight hurricanes.

Meanwhile, Tropical Depression 19 strengthened into Tropical Storm Tony last night, making it the 19th named storm of the season, which was predicted to see between 12 and 17 named storms (those of tropical storm status or higher). [In Images: Hurricane Season 2012]

Both storms have formed during the so-called "second peak" of the hurricane season, a smaller spike that occurs in mid-October, after the main peak of the season, which occurs around August-September.

Sandy is currently 65 miles (100 kilometers) south of Kingston, Jamaica, and a hurricane warning has been issued by the Jamaican government. Conditions are already deteriorating there as the outer bands of the storm arrive before the storm's center.

A hurricane warning is also in effect for certain provinces of Cuba that will potentially be in the path of the storm as it moves northward. A hurricane watch and tropical storm warning are in effect for the central and northwestern Bahamas — the first means that hurricane conditions are possible in the area within 36 to 48 hours, the second means that tropical storm conditions are expected there in 24 to 36 hours.

Haiti is also under a tropical storm warning, as most of the significant rain from the storm is on the hurricane's eastern side. Hurricane Sandy is expected to dump between 6 and 12 inches (15 and 30 centimeters) of rain on Jamaica, Haiti, the Dominican Republic and portions of Cuba. Such torrential rains can cause flash floods, particularly in Haiti, which is heavily denuded of trees that would help slow down flowing waters.

Current NHC projections have Sandy remaining a hurricane as it passes over Jamaica and Cuba, but then weakening into a tropical storm before it reaches the Bahamas. Storm intensity is notoriously difficult to predict, however, and can change rapidly.

Storm surge is also a threat to many of the countries in Sandy's path. Storm surge occurs when a hurricane's winds push the water surface up above normal water levels; it can inundate coastal areas as the storm comes ashore. Jamaica is expected to see surge between 1 and 3 feet (0.3 and 1 meter) above normal tide levels; southeastern Cuba could see between 3 and 5 feet (1 and 1.5 m) and the Bahamas between 5 and 8 feet (1.5 and 2.4 m).

The impacts of Sandy to the East Coast next week are still uncertain, but a tropical storm watch is in effect for parts of the Florida Keys and Florida's east coast. These areas could see 1 to 3 inches (2.5 to 8 cm) of rain from the storm.