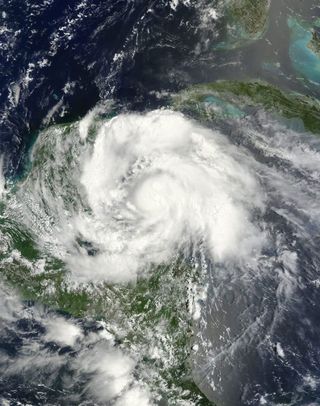 NASA's Terra satellite captured this image of Hurricane Ernesto just before it made landfall over the Yucatan Peninsula on the night of Aug. 7, 2012.
(Image: © NASA )

Forecasters have upped the chances for a busier-than-normal Atlantic hurricane season.

Officials with the National Oceanic and Atmospheric Administration issued the new numbers during a teleconference today (Aug. 9). The updated forecast calls for 12 to 17 named storms, including the storms that have already occurred.

Five to eight of those storms are expected to become hurricanes, and two to three of those hurricanes could become major hurricanes, defined as Category 3 or stronger on the Saffir-Simpson scale.

The new outlook marks a change from the original seasonal forecast, issued May 24, which called for a "near-normal" season — a total of nine to 15 named storms.

Storms are named only once they attain tropical storm status — defined as a rotating, organized storm with maximum sustained winds of at least 39 mph (63 kph). A tropical storm becomes a hurricane once its top winds hit at least 74 mph (119 kph). [History of Destruction: 8 Great Hurricanes]

So far, six named storms have hit the Atlantic basin in 2012 — four tropical storms and two hurricanes, though no major hurricanes. It's a year that kicked off with a bang. The Atlantic hurricane season officially begins June 1 and ends Nov. 30, yet Tropical Storm Alberto barged onto the scene early, churning to life on May 19.

Yet things have begun to heat up again with the formation of Tropical Storm Ernesto and other tropical systems that are being monitored for development.

And it is these storms that, in part, moved forecasters to increase the chances for a busier season than the initial outlook suggested.

"It's really the early season activity in the deep tropics that is an early indicator for activity to come," said Gerry Bell, the lead hurricane season forecaster at NOAA's Climate Prediction Center.

Bell pointed to Hurricane Ernesto, now downgraded to a tropical storm, and Tropical Storm Florence. Both storms formed in early August, a month that marks the beginning of the peak of hurricane season. Both Ernesto and Florence were birthed from weather systems that moved off Africa and out over tropical Atlantic waters.

"When you get activity like that this early in the season, it's an indicator that conditions are extremely conducive to more activity," Bell said. "That's different from the early storms from May and June," he explained.

El Niño could be a mitigating factor for the now-increased chances for a busier hurricane season, Bell said. The cyclical cooling of Pacific waters tends to quell hurricane activity in the Atlantic, churning up opposing winds in the atmosphere that can disrupt a storm's rotation.

However, those effects wouldn't be felt until late in the season.

Forecasters expect El Niño to get started in August or September, "but remember, El Niño is in the Pacific," Bell said. "Usually there is a time delay of several weeks between when El Niño forms and when we start getting effects in the Atlantic."

A record number of early storms hit the Atlantic basin in 2012. When Tropical Storm Debby spun up in late June, this became the first year on record — the U.S. storm catalog began in 1851 — that four tropical storms or hurricanes have appeared before July 1.

At the time, forecasters emphasized that, despite the dramatic numbers, there's a good chance this could have happened a few times before, but the technology simply wasn't available to see storms like Hurricane Chris, that stay far out to sea.

This year is a marked contrast to 2011, which was one of the busiest on record.

A total of 20 named storms — seven hurricanes and 13 tropical storms — barreled across the region last year, although with the exception of destructive Hurricane Irene and Tropical Storm Lee, the majority of the storms steered clear of the United States.

Furgione said the relative lull in land-falling hurricanes in recent years can instill a sense of false security for people who live in hurricane country, something she strongly discouraged.

"We want folks to know it only takes one hurricane — and we can't determine where that hurricane is going to be or where it's going to occur," she said. "Folks need to be prepared now."