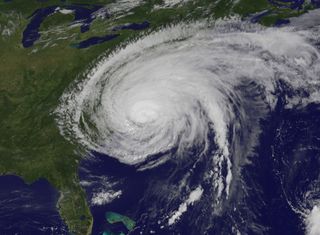 The outlook for the 2012 Atlantic hurricane season is "normal to near-normal," according to researchers who unveiled their predictions for the number and severity of storms likely to spin up over the Atlantic basin in the coming months.

Officials with the National Oceanic and Atmospheric Administration (NOAA), the federal agency that studies and tracks severe weather, made the announcement at a press conference today in Miami. Hurricane season officially begins on June 1 and ends on Nov. 30, though storms can, and have, formed outside of those dates when conditions were favorable.

The outlook indicates a near-normal season is likely, with a total of nine to 15 named storms for the Atlantic in 2012. (Named storms include tropical storms and hurricanes.) Of those storms, between four and eight are likely to become hurricanes — organized, rotating storms with sustained winds of 74 mph (119 kph) or faster. Between one and three are likely to become major hurricanes, defined as Category 3 storms or above — hurricanes with winds of at least 111 mph (179 mph).

The potential mitigating factor in the mix is El Niño, officials said, because of the effects it has on winds in the upper atmosphere that can impede the growth of a burgeoning storm.

"El Niño tends to increase the wind shear, and that tends to suppress or kill off hurricanes," said Gerry Bell, lead hurricane season forecaster at NOAA's Climate Prediction Center. "So if El Niño forms, that would be a limiting factor to the season's strength."

El Niño is a cyclical warming of Pacific Ocean waters that has wide-reaching climate effects. It is the flipside of La Niña, a cyclical cooling of those waters; a powerful and long-lasting La Niñaonly recently came to an end, with neutral conditions now in place.

This year's outlook for a maximum of 15 named storms and three major hurricanes "is a little less than some of these active seasons, but that's still a lot of activity," Bell said.  "It doesn't mean anybody is off the hook at all."

However, the forecast does mark a lull in activity compared with the 2011 hurricane season, which was one of the most active on record for the Atlantic basin.

Although the majority of the 2011 season's storms spared the United States, Hurricane Irene caused widespread destruction, and was one of a dozen billion-dollar weather disasters to hit the United States last year.

The first named storm of the 2012 season, Tropical Storm Alberto, spun up on May 19, ahead of the official start to the season, and was gone by May 22.

Tim Manning, FEMA deputy administrator for protection and national preparedness, urged those who live in hurricane-prone areas to prepare now, adding that families should draw up a plan, and makes sure to have three days of food, water and emergency supplies on hand.

"It takes just one storm to come ashore to create a disaster," he said.