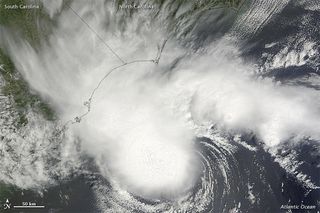 This image of Tropical Storm Alberto was taken by the Moderate Resolution Imaging Spectroradiometer (MODIS) on NASA's Terra satellite on May 19.
(Image: © NASA)

A NASA satellite snapped a picture of the cyclone that brought an early start to the 2012 Atlantic hurricane season, Tropical Storm Alberto, not long after the storm formed off the coast of South Carolina.

While hurricane season doesn't officially begin until June 1, "we've had a storm form outside the season — it's not a surprise," Dennis Feltgen, a spokesman for the National Hurricane Center, told OurAmazingPlanet.

Alberto formed over the Gulf Stream, a narrow band of warm water, an essential fuel for burgeoning tropical cyclones (a term that encompasses hurricanes and tropical storms). Atmospheric conditions were also just right for the storm to form, Feltgen said.

NASA's Terra satellite captured a natural-color image of Alberto on the day it formed. Although Alberto sported the spiral shape typical of tropical storms, it lacked a distinct eye, a feature of hurricanes and strengthening storms. A National Oceanic and Atmospheric Administration satellite also snapped a picture of the storm today (May 21).

The storm, which is currently 175 miles (280 kilometers) east of Jacksonville, Fla., and 180 miles (290 km) south-southeast of Charleston, S.C., is expected to curve up parallel to the East Coast over the next two days. No watches or warnings are in effect for the coast, but surf could be rough there, Feltgen said.

Alberto's maximum sustained winds are around 40 mph (65 kph), and it is expected to weaken into a tropical depression as it moves northward.

While the busiest times of the hurricane season are typically in August and September, hurricanes can form anytime when conditions in the atmosphere and ocean are right. "It's not like somebody flips a switch" and the season starts, Feltgen said.

The early start to the season isn't an indication of whether or not the season will be a busy or particularly destructive one, Feltgen added, though it is a reminder to coastal residents that the season is coming and they should be prepared, he said.

And whether a season starts early or late, "it only takes one storm hitting you to make it a really bad year," Feltgen said. He cited the example of Hurricane Andrew, which formed in August during the 1992 — a very late start to the season — and which devastated southeast Florida.