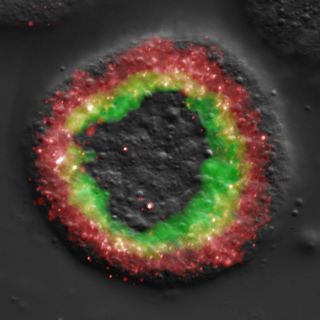 This image of a sea-urchin embryo shows where two regulatory genes are being expressed (labeled in fluorescent green and red).
(Image: © Caltech/Isabelle Peter)

This article was provided to LiveScience in partnership with the National Science Foundation.

Biologists at the California Institute of Technology have for the first time built a computational model of one of these networks. Their work is based on roughly a decade of research into how gene networks control development in sea-urchin embryos.

The scientists say the model is remarkably good at calculating what sea-urchin gene regulatory networks do to control the fates of different cells in the early stages of development. The model confirms that the interactions among a few dozen genes suffice to tell an embryo how to start developing different body parts in the right places. The model provides a powerful new way to look at gene regulatory networks, allowing scientists to better study the genetic bases of both development and evolution.