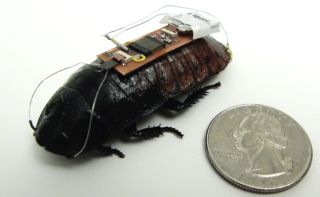 Researchers say they've figured out a way to create cyborg, remote-controlled cockroaches, hoping one day the resilient creatures could be steered into disaster zones to gather information and look for survivors.

Video footage from the experiments at North Carolina State University shows the part-robot roaches being directed along a curving path via remote control. The researchers say they attached a lightweight chip with a wireless receiver and transmitter onto Madagascar hissing cockroaches and wired a microcontroller to the insects' antennae and cerci — the sensory organs on the bug's abdomen that cause it to run away from danger.

With electrical signals, the researchers stimulated the cerci to trick the roaches into thinking they needed to scamper away from a predator. Once moving, charges sent to the antennae controlled the insects' direction. A signal sent to one antenna could make a roach think its feeler was touching a wall, sending it in the opposite direction, a statement from NC State explained.

"Building small-scale robots that can perform in such uncertain, dynamic conditions is enormously difficult. We decided to use biobotic cockroaches in place of robots, as designing robots at that scale is very challenging, and cockroaches are experts at performing in such a hostile environment," NC State researcher Alper Bozkurt said in the statement. [See Cyborg Roach Video]

"Ultimately, we think this will allow us to create a mobile web of smart sensors that uses cockroaches to collect and transmit information, such as finding survivors in a building that's been destroyed by an earthquake," Bozkurt added.

The researchers reported the results of their experiments late last month at the annual International Conference of the IEEE Engineering in Medicine & Biology Society in San Diego, Calif.

Other researchers have floated the possibility of technologically enhanced roaches. Scientists at Case Western Reserve University demonstrated how the insects could be outfitted with an implantable biofuel cell powered by a sugar the bugs make from their food. Electricity from such a cell then could be used to power sensors on the insect or to manipulate it by remote control.