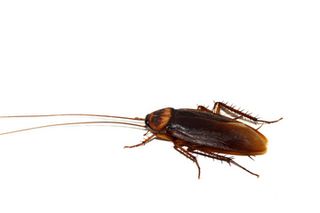 Researchers have devised an implantable fuel cell that taps into a cockroach's metabolism to generate electrical energy. This is an important step toward creating insect-robot hybrids that can conduct surveillance.
(Image: © dreamstime)

Equipped with tiny sensors, insects could scout out buildings filled with noxious chemicals, check under rubble after an earthquake and go places no human spy ever could. In a first step toward making these technologically enhanced insects a reality, scientists have devised a way to power bug-robot hybrids by tapping into their own metabolism.

The secret: an implantable biofuel cell powered by a sugar the cockroaches make from their food.

The device doesn't appear to harm the insect either. Neurobiologists on the team implanted the tiny device into the abdomens of five immobilized cockroaches independently, measured the power it produced and removed it. The cockroaches appeared to behave normally afterward, said Daniel Scherson, the senior researcher and a professor of chemistry at Case Western Reserve University.

Although the device converted the sugar into energy slowly, the electricity it generated could be stored in a battery and used in bursts, Scherson said.

This electricity could ultimately be used to power sensors on the insect or to manipulate its nervous system, essentially putting a joystick on it, according to Scherson, who noted that this sort of control is "not something we expect to do soon." [Military Develops 'Cybug' Spies]

Cockroaches have so-called open circulatory systems, where blood, containing trehalose, sloshes around inside their bodies. Blood inside is at a low pressure, and the two electrodes can be inserted without damaging the insect or any critical internal organs.

Here's how it works: The fuel cell consists of two electrodes; at one electrode, two enzymes break down a sugar, trehalose, which the cockroach produces from its food. The first of the two enzymes, trehalase, breaks down the trehalose into glucose, then the second enzyme converts the glucose into another product and releases the electrons. The electrons travel to the second electrode, where another enzyme delivers the electrons to oxygen in the air. The byproduct is water.

"As long as they are eating, I can just tap into their blood and [turn] their chemical energy into electrical energy," Scherson told LiveScience.

This is the first time a system like this has worked in a live insect, and the development of the two-enzyme electrode was key to its success, he said.

To test the fuel cell in something besides a cockroach, they turned to another organism that contains trehalose: shiitake mushrooms. They found that the biofuel cell also converted chemical energy into electrical energy when stuck into a mushroom.

Their research was published online earlier this month (Jan. 3) in the Journal of the American Chemical Society.