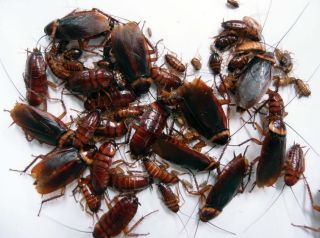 A colony of cockroaches maintained by virgin birth, or parthenogenesis. The roaches have been temporarily anesthetized with carbon dioxide.
(Image: © Katoh, et al./Zoological Letters (2017))

It isn't particularly pleasant to imagine this happening under the fridge, but female American cockroaches (Periplaneta americana) can produce eggs by parthenogenesis, a type of asexual reproduction. Like many other arthropods that can reproduce in this way, cockroaches tend to do so only if males aren't available; offspring born by parthenogenesis develop from the maternal egg cell alone, so they have less genetic diversity than offspring created by sexual reproduction.

For American cockroaches, eggs produced by parthenogenesis have a lower rate of survival than egg clutches produced after roach sex, but the offspring of the single moms are capable of surviving and mating. Researchers from Hokkaido University in Japan were curious about what prompts roaches to go with this less-successful reproductive strategy. [Animal Sex: 7 Tales of Naughty Acts in the Wild]

A lack of males couldn't be the only reason, the researchers wrote in a paper published March 13 in the journal Zoological Letters. Females need to be able to discern not only an overall lack of males, but the proportion of males related to them and the likelihood of finding a mate given a particular population density.

To test the effect of social milieu, the researchers put female cockroaches in different situations. In the control group, a male and a female were housed together and were allowed to mate. In other cases, females were kept with one, two, three or four other females. Other female roaches were kept with castrated males. The researchers also tested the effects of adding pheromones, chemicals that insects use for communication, to all-female cockroach groups.

By syncing up parthenogenesis, females in a group may benefit by ensuring that more of their offspring survive, the researchers wrote. Cockroach nymphs hatching together would have safety in numbers, which might counteract the disadvantage that they hatch at lower rates than offspring produced by sexual reproduction.

This may be a very primitive example of female cooperation, the researchers added. Male roaches housed together tend to fight until they cut each other's antennae off, but females huddle together, and apparently even harmonize, their reproductive schedules. This tracks with overall roach ecology, as males tend to leave roach colonies to avoid inbreeding, while female kin stick together, the researchers wrote.