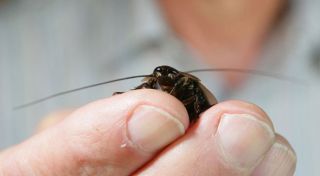 One of the cockroaches used in Vanderbilt's study on how a cockroach's biological clocks affects its learning ability.
(Image: © Daniel Dubois)

Cockroaches learn new tricks well in the evening, but they're lousy students in the morning.

A new study, published in the Proceedings of the National Academy of Sciences, found that while cockroaches were able to pick up and remember lessons taught in the evenings, they might as well have stayed in bed during the morning hours.

Previous research has suggested that "biological clocks," which adjust the body's alertness and hormone levels over a 24-hour cycle, play a major role in an organism's ability to learn and retain lessons. One study has even shown that mice experienced mild amnesia when subjected to jet lag, a sudden disruption to the biological clock.

"This is the first example of an insect whose ability to learn is controlled by its biological clock," said researcher Terry L. Page of Vanderbilt University.

To figure out how a cockroach's biological clock impacted its learning ability, the scientists at Vanderbilt University trained the bugs to choose the smell of peppermint over normally-preffered vanilla scents at different times of the day. This was achieved by rewarding them with tasty sugar water each time they caught a whiff of peppermint.

"With the cockroaches trained in the morning, we were quite surprised at the profound learning deficit the next day," Page said. "They forgot everything and behaved as if they had no training at all."

Page noted that although they have no idea why cockroaches were unable to learn at that particular time of day, these kinds of studies can give insight into the interaction between learning, memory and biological clocks, as well as what can influence these processes in other creatures.