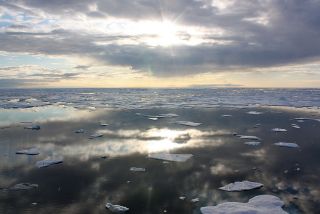 A group of researchers has embarked on the first comprehensive study of marine life in the eastern Chukchi Sea near Alaska. Their findings will be used by the Department of the Interior to help decide whether to grant future leases for offshore oil exploration and drilling in the region, and to regulate transportation and future fishing.

"We are going up there to look at the oceanography, plankton, fish and crab in the region," said Michael Sigler, a marine biologist with the National Oceanic and Atmospheric Administration's fisheries service in Alaska.

Little baseline data has been collected in the region, which is currently little-trafficked and fished due to its remoteness and its ice-choked waters. As ice cover throughout the Arctic decreases, however, these pursuits are likely to increase.

Although surveys have been conducted in both the Beaufort and Chukchi seas since 1959, U.S. fishery research in the Arctic has been infrequent and limited in scope, according to a statement from NOAA. A similarly comprehensive survey of the northern Bering Sea was not conducted until 2010. [Images: Creatures of the Bering Sea]

The new study is primarily meant to gather data for scientists and to avoid negative impacts of oil exploration in the region, Sigler told OurAmazingPlanet. (Royal Dutch Shell has been granted a lease to drill exploratory wells in the area, and the company hopes to begin in the next few weeks, according to the Reuters news service.)

Indigenous Alaskans have long subsisted on seals and bowhead whales that live in the area, Sigler said. To the south, in the Bering Sea, is one of the nation's largest fisheries, he said.

The scientists will look at many aspects of the Arctic marine food web, from the chemistry of the ocean water to the health of plankton in the region. They will collect data about what's living there, how old the animals are and how they're doing, Sigler said.

All the fish in the sea

One of the more important fish they will study is the Arctic cod, which is a primary food for ringed seals, which in turn are a favorite meal for polar bears.

Two fishing vessels are being used in the survey, the first of which set sail Aug. 6 from Dutch Harbor, Alaska. The research cruise will last until Sep. 27. Scientists will deploy nets at the surface, at midlevel depth and at sea bottom to collect specimens of fish and shellfish, Sigler said. Acoustic instruments will be used to see how many fish are in the sea.

One focus of the research will be upon the biology of salmon, saffron cod, snow crab and capelin (a small fish), which serve as food for seabirds, sea mammals, and rural coastal communities.