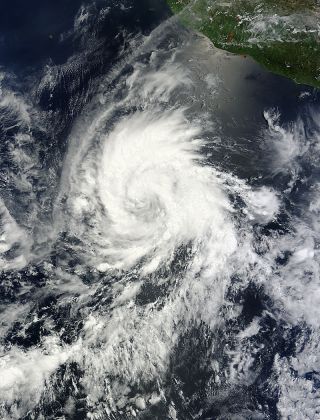 NASA's Terra satellite captured this visible image of Emilia when it was a tropical storm off the western coast of Mexico on July 8 at 1:45 p.m. EDT.
(Image: © NASA MODIS Rapid Response Team )

Within 24 hours of becoming a hurricane, Hurricane Emilia has rapidly strengthened into a major Category 4 storm, making it the strongest storm of the hurricane season so far.

Emilia first formed as a tropical storm on Saturday night, and strengthened into a hurricane early yesterday morning (July 9). It then rapidly gained Category 2 strength on the Saffir-Simpson scale and as of this morning had strengthened further into a Category 4 storm with maximum sustained winds of 140 mph (220 kph).

The hurricane is located 680 miles (1,100 kilometers) south-southwest of the southern tip of Baja California and is heading further out into the ocean, posing no threat to land.

Emilia's strength could fluctuate over the course of the day, according to the latest updated from the U.S. National Hurricane Center in Miami, Fla., but the storm is expected to begin a gradual weakening tonight that will last through Thursday.

Former Hurricane Daniel, now a tropical storm, is also moving westward and is far out over the Pacific Ocean, some 1,400 miles (2,300 km) east of Hilo, Hawaii. Daniel is also expected to weaken further, becoming a tropical depression by Thursday.

Emilia is the fourth hurricane and fifth named storm of the 2012 season in the East Pacific basin and the first major hurricane in either the Pacific or Atlantic.

Four named storms have formed in the Atlantic basin so far this season, with two actually forming before the official June 1 start date to the season. The Atlantic is currently quiet though, and forecasters are not eyeing any weather systems that could turn into tropical cyclones (the blanket term for tropical storms and hurricanes).

Projections for the 2012 Atlantic hurricane season call for a total of nine to 15 named storms, with four to eight of those storms becoming hurricanes.