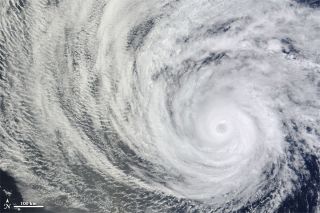 Hurricane Daniel churns over the Pacific Ocean in this photo taken on July 8, 2012, by NASA's Terra satellite.
(Image: © NASA)

The spiraling clouds and eye of Hurricane Daniel was spotted by a satellite as it churned away in the Pacific Ocean.

Born as a tropical depression on July 4, Daniel quickly grew to become a tropical storm and then became a Category 2 hurricane by midday on Sunday (July 8). NASA's Terra satellite snapped this photo of the storm hours later.

Daniel is the third hurricane spawned in the Pacific so far this hurricane season. The fourth, Hurricane Emilia, followed right on its heels, becoming a hurricane early this morning (July 9).

According to the latest report from the National Hurricane Center in Miami, Daniel is packing maximum sustained winds of 85 mph (135 kph) and is weakening as it moves westward across the ocean and over cooler waters. It is currently about 1,300 miles (2,000 kilometers) west-southwest of the southern tip of Baja California.

The system presents no immediate hazard to people on land, according to the National Weather Service, and it's expected to weaken further as it continues to move westward. Remnants of the storm do have the potential to bring strong winds and heavy rains when they pass south of Hawaii on July 13, according to AccuWeather.

Emilia, meanwhile, has been gathering strength and is expected to become a major hurricane (one of Category 3 or higher on the Saffir-Simpson scale) sometime tomorrow.