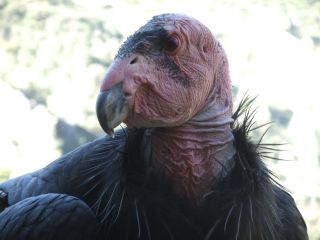 There are fewer than 300 California condors living in the wild. The species is listed as "endangered" under the Endangered Species Act.
(Image: © Photo courtesy of Daniel George)

Despite three decades of conservation efforts, the endangered California condor is still on the brink of extinction, new research finds.

Without continued intensive work by humans, there could be as few as 22 of these enormous scavengers in California in as few as 11 years — the same low that the population reached in 1982, triggering emergency conservation measures. The culprit, scientists report Monday (June 25) in the journal Proceedings of the National Academy of Sciences, remains the same as it did 30 years ago: lead poisoning from leftover ammunition.

"The three main things we found were that condors are continually exposed to harmful levels of lead, the principle source of that lead is ammunition, and that lead poisoning from ammunition is preventing the recovery of the condor population," said study researcher Myra Finkelstein, a research fellow at the University of California, Santa Cruz. [10 Species You Can Kiss Goodbye]

Since 1982, the California condor (Gymnogyps californianus) population has grown to 400 birds. As of May 31, 2012, 236 of these condors were living in the wild in California, Arizona and Utah, with 131 in California alone. But even wild condors are subject to intensive management, from GPS tracking to vaccination and semiannual health checkups. Conservation officials also provide food near nesting sites and do periodic cleanups of nesting areas.

All of this work keeps the population of condors in California roughly stable, Finkelstein and her colleagues found. But conservationists are working against the specter of an "epidemic" level of lead poisoning, the researchers reported. A tally of 1,154 blood samples taken from 150 birds between 1997 and 2010 found that each year 50 percent to 88 percent exceed the "safe" threshold for blood lead levels.

Worse, 20 percent of the birds each year had levels so high that they required immediate treatment to prevent serious illness or death. Between 1997 and 2010, 48 percent of condors tested required treatment, and many were poisoned several times during the study period.

Even if condors don't die of lead poisoning, sub-lethal levels can interfere with their health and potentially their reproductive abilities, Finkelstein told LiveScience.

Analysis of the lead in the condors revealed that it comes mainly from lead-based ammunition, Finkelstein said. Because condors are scavengers, they easily ingest lead in animal corpses left by hunters. Some areas of California ban the use of lead ammunition to protect condors, but the birds range over hundreds of miles for food, meaning they can become contaminated outside of their protected zones. [10 Species Success Stories]

All of the work put into condor conservation, from lead treatment and nest cleanups to vaccinations, has put the wild population on a stable but not a growing trajectory, Finkelstein and her colleagues found. Without the addition of new, captive-reared birds, the free-flying condor population would take 1,800 years to reach the conservation goal of 150 non-captive condors in California.

If lead poisoning treatment alone was cut back, the population would decline between 2 percent and 12 percent a year, the researchers found. That would put the condor population back to 1982 levels in between 11 and 61 years, depending on the speed of the decline.

"People go out of their way and make extraordinary efforts to maintain the health of this population," Finkelstein said. "That is a concern for the future. Are we able to continue putting these resources in to mitigate all these effects from lead poisoning in these birds?"

Because condors only scavenge and don't hunt, they're at greater risk of lead poisoning than other birds, Finkelstein said. But the health of the California condor is a sign of the contaminants in the California landscape, she said. And humans are not immune.

"Lead does not discriminate between poisoning a condor and poisoning a kid," Finkelstein said.