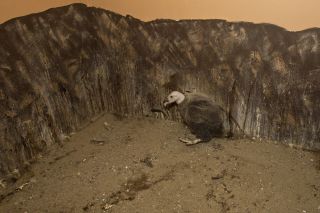 The San Diego Zoo Safari Park's 6-week-old California condor, Saticoy, got its first veterinary check up on Monday (April 23) and looked to be in excellent health.

After its visit with the doctor, the chick settled quickly back into its nest.

Until today, Safari Park keepers and veterinarians had only observed the chick through the Condor Cam, just like Saticoy's loyal online followers. Viewers even saw the chick hatch live on the webcam.

Through the camera, the chick's fans have watched it grow, its secondary, darker feathers coming in and seeing it increase to the size of a bowling ball that weighs 8 pounds (3.6 kilograms).

During the checkup, veterinarians administered a routine West Nile Virus vaccination to protect the chick from the disease, inserted a small microchip for identification, similar to those used in domestic dogs and cats, and took a small blood sample to run a complete blood evaluation. The sample will also be used to identify whether the chick is a male or female. The results will take several days.

Since the California Condor Recovery Program began in the 1980s, when there were only 22 condors left in the world, the Safari Park has hatched 174 chicks and released more than 80 condors into the wild. Today, there are approximately 386 condors, more than half of which are flying free in California, Arizona and Baja California, Mexico.