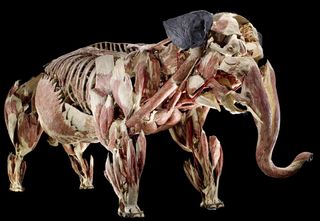 One of the giants of the "Animals Inside Out" exhibition, the elephant, shows off its muscles.
(Image: © © Gunther von Hagens, Institute for Plastination, Heidelberg, Germany www.bodyworlds.com)

Naked animals may not cause even a blush, but a look under the covers of our four-legged friends (and finned ones) is a revelation.

Gunther von Hagens, creator of the controversial yet wildly popular "Body Worlds" exhibit of dead humans, has expanded his penetrating vision by presenting "Animals Inside Out." In the exhibition opening Friday (April 6) at the Natural History Museum in London, von Hagens reveals the muscles, blood vessels and weird insides of animal corpses.

As in the human version, the exhibit relies on the plastination process, invented by von Hagens, in which body fluids are replaced by a hard polymer.

From goats to giraffes and sharks to ostriches, some of the animal kingdom's most spectacular specimens will be on display without their "natural clothing." Visitors can stand face to face with a muscle-y gorilla or look up at a glowing-red porbeagle shark whose arteries have been injected with a red resin during plastination. [Photos of the Plastinated Animals]

"Usually you see our specimens as skeletons, stuffed animals or preserved in alcohol," Georgina Bishop, exhibition developer at the museum, said in a statement. "At Animals Inside Out, visitors will see animals close up in a whole new way and in the most amazing detail as they get under the skin of some of nature's most incredible creatures."

With skin peeled away, the many layers that make up a living animal come to light, including the muscles that let a bunny hop or a reindeer run, and the blood vessels and heart that must work extra hard in the giants of the animal kingdom, like the fierce bull and towering giraffe. And don't forget the skeleton. It turns out the tallest land animal (the giraffe) has the same number of neck vertebrae (seven) as humans. The difference is that each is much longer.

Exhibit developers say such a detailed look at animal anatomy is crucial to discovering more about the evolution of animals and the natural world. In Body Worlds, in which human corpses pose as if alive, von Hagens had suggested the exhibit would help people embrace death. By contrast, the new animals exhibit may be more about life, if not past life.

An anthropologist told LiveScience spoke in 2010 that even the human corpses represented life more than death. "I think the exhibits are more about living, about how our bodies — beneath the skin, our bodies which we never get to see from the inside out — are so complex and so incredibly multifunctional," Jane Desmond of the University of Illinois at Urbana-Champaign said in a Q&A about the Body Worlds exhibit.

The Animals Inside Out exhibition will run from April 6 through Sept. 16, 2012.