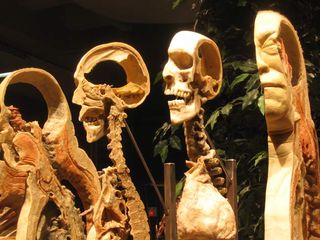 In Body Worlds, Ring Man was sliced into several vertical pieces to show how the body fits together.
(Image: © Heather Whipps.)

TORONTO, CANADA—An exhibition of human corpses is offering a new opportunity for life after death that's as easy as filing a simple form.

Then you have to die, of course.

Body Worlds, a controversial yet wildly popular traveling exhibit of real human bodies and body parts, has been raising eyebrows since it was first displayed in 1996. Nearly 20 million people have since visited one of its three touring editions.

The show highlights plastination, a preservation technique whereby an embalmed body is drained of its natural fluids and injected with a polymer solution. The body is posed and then cured and hardened into position.

Plastination is viewed as a novel and useful alternative to the traditional post-death options like burial and cremation. Proponents see the process as potentially useful to medical students, who some say rely too much on computer models instead of working with real bodies.

Body Worlds is the brainchild of German anatomist Gunther von Hagens, the inventor of plastination who also created a stir in 2002 by performing the first public dissection in 180 years in London. He defended the event by claiming that human anatomy and pathology should be available to the public at large, not just the medical community. The same reasoning is part of the motivation behind the current show.

"The Body Worlds exhibition is intended to help educate people and provide the opportunity for lay people in particular to gain a greater understanding of the body and its functions," notes the official brochure of von Hagens' Institute for Plastination in Heidelberg, Germany.

At the Ontario Science Center in Toronto, Body Worlds visitors on a recent evening had a range of emotions.

"You almost forget they're real," said a man in his 20s who preferred to remain anonymous. "Then they throw in stuff like that to remind you," he said, pointing to a patch of hair left attached to the skull of a female plastinate called Head-Diver.

Indeed, most of the models' inner workings had a dry, meat-like quality to them. It was only when the bodies included typically external parts like hair and skin that they seemed more human. [See Ring Man, Soccer Player, X-Lady and the Skaters.]

One male plastinate hit this point home with his intact, grimacing face.

"He does not look happy about how he died," said an observer to her friend.

In only one section of the exhibit was the mood slightly somber—within a dimmed, cordoned-off area devoted to plastinated babies and an adult female who'd died during pregnancy. Here, visitors fell into an unhurried, hushed line that filed past the displays. A woman chatting loudly on her cell phone was shot several glares of contempt.

While the concept of body donation is not new, supporters of plastination are now calling for the technology to be used right alongside the traditional methods of dissection taught in medical classrooms. Like von Hagens, they are wary of the increasing reliance on computer models.

Von Hagens criticizes "computer simulations used in anatomy teaching because they show the average body, and doctors need to be trained to expect wide variation between bodies," writes Tony Walter in the University of Reading's Sociology of Health & Illness journal.

Les Ullyot, a family practitioner and medical examiner based in Winnipeg, Canada, remembers the days when fresh cadavers were the only thing med students had to work on. He graduated from the University of Manitoba in 1970.

"Dissection was a very hands-on, dirty experience back then," he told LiveScience. "Nowadays, medical students are increasingly using digital models. It hasn't made them better or worse, but their relationship to the body and to anatomy is definitely different as a result."

All of Body Worlds' plastinated models are individuals who consented to donate their bodies specifically for that purpose. With more people being exposed to the exhibit, von Hagens' institute hopes to see a rise in the number of people interested in donation, which now tops 6,000 individuals and includes von Hagens and his family.

Formal studies gauging visitor reactions to Body Worlds found that in addition to an overwhelming resolve to lead a healthier lifestyle, 20 percent of those surveyed were more willing to donate their body for plastination purposes after death. Anyone interested in the process, in fact, can pick up information and a donation form at the exhibit itself.

A form completed by one donor, identified only as Anthony from the United Kingdom, offered some insight into why one might choose such an alternative.

"I was going to have it burned after having any useful part removed and my body ashes thrown into the sea," Anthony writes. "Then after seeing the plastination exhibit I was so impressed with what an artistic and useful purpose it could be put to that it seemed such a waste."