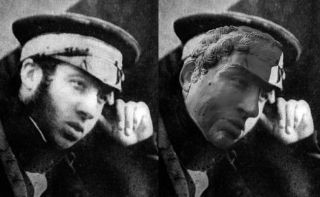 Researchers reconstructed the explorer's face (right) and compared it to pictures of the expedition's officers to find a likely match.
(Image: © ©National Maritime Museum/ ©English Heritage)

In 1845, two ill-fated British ships headed for the Canadian Arctic in the hope of discovering the Northwest Passage to the Pacific Ocean. More than two decades later, the nearly complete skeleton of one of the explorers was recovered from a shallow, stone-covered grave on King William Island in the Canadian Arctic.

The remains were then identified as those of Henry Le Vesconte, a lieutenant aboard one of the ships, the HMS Erebus. However, a modern analysis points to another identity for the man. [Image of explorer's facial reconstruction]

Whoever he was, this man appears to have died early and so escaped the worst.

"That the body was accorded formal burial suggests that the death occurred before the final throes of the expedition when the dead seem to have been left unburied and, in some cases, cannibalized," write lead researcher Simon Mays of English Heritage, an organization that advises the government on historic issues, and colleagues in the Journal of Archaeological Science.

The grave, then believed to be Le Vesconte's, was first discovered by native Inuits who later led an American adventurer to it. The body was returned to England, analyzed and buried beneath the Franklin Memorial in Greenwich. (Sir John Franklin led the expedition.) In 2009, renovations to the monument required that the body be exhumed, creating the opportunity to apply modern forensic techniques.

This wasn't the first time. In the 1980s, a team led by Canadian researcher Owen Beattie studied the remains of three men who also died early during that expedition and were buried in the permafrost on Beechey Island. Lead levels in these men's tissues were high, as they were among the scattered remains found there, leading to speculation that lead poisoning, possibly from poorly canned foods, had contributed to their deaths.

Mays and colleagues re-examined the bones thought to belong to Le Vesconte to estimate the man's age, ancestry and body shape. They concluded he was likely 30 to 40 years old, European and rather tall and slender. A gold filling in a tooth indicated a certain social status. Such filings are rare in 19th-century English burial grounds, except high-status church burial vaults, the researchers write in an online version of the journal article published on Feb. 27.

Scurvy — a disease caused by vitamin C deficiency — and tuberculosis have both been implicated in the disaster; however, this man's body contained no evidence of either. A chemical analysis of his tooth enamel offered clues about where in Britain he grew up, eliminating most of southwestern England as his residence. They knew that Le Vesconte had grown up in Devon, a southwestern county, making this identification unlikely.

Based on the clothing on the body and the gold filling, the researchers assumed the man was one of 23 officers on the trip. (Le Vesconte was eliminated from the total pool of 24.)

Alan Ogden, of the University of Bradford, created a facial reconstruction using a cast of the skull. They then compared the facial reconstruction with daguerreotypes — essentially old photos — taken for some, but not all, of the officers. They found a likely match in Harry Goodsir, an assistant surgeon and naturalist, who had a bulky, prominent lower lip and a deep groove beneath it that appeared to match the skull's unusual dental conformation. Raised in Scotland, a location that fit with the results of the chemical analysis, he was described by a shipmate as "long and straight," and would have been between 26 and 29 years old at the time of his death, an estimate that is younger than the overall impression given by the skeleton, but reasonable, according to the researchers.

They are, however, cautious.

"It is important to emphasize that facial reconstruction can eliminate possible candidates, but it cannot prove identity: It can only indicate a high probability of a match," the researchers write, pointing out that 10 officers did not have their pictures taken.

All 129 explorers, including Sir Franklin, perished on the expedition and personal identification has been possible for only a few, including Goodsir.