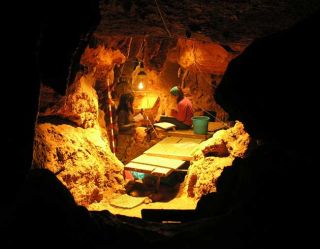 A cave system in El Sidron, Spain, preserved remains of at least 12 Neanderthals who may have been a group of relatives.
(Image: © Lalueza-Fox Lab.)

The remains of a possible family group of Neanderthals, including an infant, were discovered in a cave in Spain, researchers reported. The bones of the 12 individuals show signs of cannibalism, suggesting another Neanderthal group came along and chowed down on the meat.

This group of Neanderthals died some 49,000 years ago, the research suggests. Shortly after, a violent storm or other natural disaster likely caused the cave to collapse and bury their remains at the El Sidron site.

The finding, detailed last week in the journal Proceedings of the National Academy of Sciences, reveals for the first time genetic evidence of a social kin Neanderthal group. Analyses suggest the group included three adult males, three adult females, three adolescents (possibly all male), two juveniles (one 5 to 6 years old and the other from 8 to 9), and an infant. [The Many Mysteries of Neanderthals]

"I think this is a pretty significant piece of research, and [it] really adds to the forensic understanding of what happened in that cave," said John Hawks, an anthropologist at the University of Wisconsin-Madison, who was not involved in the current study, referring to the possibility of cannibalism.

"I don't see any real reason to question the scenario, but like most cases of archaeological finds there are always questions as to the fidelity of the evidence," Hawks told LiveScience in an e-mail. "That being said, my inclination would be to revisit some other Neanderthal sites keeping in mind the relatively strong evidence of cannibalism and systematic 'warfare' at El Sidron. I think there are other pieces that can be put together into a stronger case across many sites — that is I don't think this was a single incident without parallels elsewhere"

The remains have been unearthed over the last 10 years. "They were difficult to isolate because they are highly fragmented, due to the cannibalism," said lead author Carles Lalueza-Fox, of the Institute of Evolutionary Biology in Barcelona, adding, they included: lots of teeth, mandibles, long bones and skull fragments.

The researchers used mitochondrial DNA, which resides in the energy-making structures of cells, to determine who was related to whom. This type of DNA, unlike nuclear DNA, gets passed down from females only. To figure out sex of the individuals, the team analyzed the remains for a Y chromosome, since only males are equipped with a Y.

Results suggested the child about 8 to 9 years old was the offspring of one of the female adults, while another adult female was the mother of the infant and child about 5 or 6. The three adult males shared mtDNA, suggesting they were brothers or otherwise related through the maternal line.

Past research of the nuclear DNA from remains of the women who bore the 5- or 6-year-old child suggests she was a redhead, Lalueza-Fox said during a telephone interview. Those results were published in a past issue of the journal Science.

"There are many different markings in many different bones in all 12 individuals, including traditional cut marks to disarticulate bones and remove muscle insertions, snapping and fracturing of long bones to extract the marrow," Lalueza-Fox told LiveScience.

These marks "could indicate that the assemblage corresponds to a Neandertal group processed by other Neandertals on the surface," the researchers wrote. (Neandertal is an alternative spelling of Neanderthal.)

He pointed out that cannibalism is not rare among Neanderthals, though the current finding is unique in its scale (12 individuals). "The dating of 49,000 years ago, on the other hand, indicates that the cannibals should be other Neandertals, since modern humans were not around at that time in Europe," he said.

That means the men in the group are kin, while the women came from different kin groups — a phenomenon called patrilocality. "The authors' hypothesis about patrilocality is consistent with the mtDNA, and I think it is likely to be the correct one," Hawks writes in his blog. He adds, however, that the interpretation isn't foolproof.

"For one thing, Neandertals are already known to be relatively low in mtDNA variation, with very little regional population structure in the mtDNA. In such a population, it wouldn't be surprising to find individuals sharing the same mtDNA haplotype, even if they were not close kin," Hawks writes.