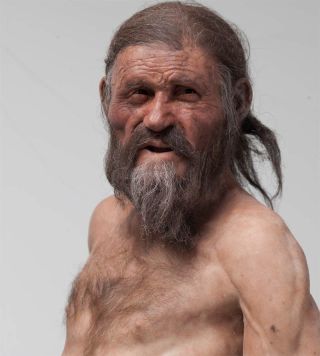 Ötzi, the 5,300-year-old mummy from the Alps has a new face thanks to two reconstruction artists.
(Image: © © South Tyrol Museum of Archaeology/Foto Ochsenreiter)

Iceman, a 5,300-year-old mummy also called Ötzi and discovered in the Alps, is showing a new face to the world at the Italian museum where he resides.

The finished face reveals a man with deep-set eyes, a long nose, weathered skin and hair that appears to be on its way to dreads.

Ötzi was discovered in 1991 by hikers in the Ötztal Alps along the Austrian-Italian border. Since then, researchers have mined his remains, the artifacts buried with him and his burial site for clues about his life (he lived sometime between 3350 and 3100 B.C.), death and descendants.

Over the years, research has added many details, putting his age at 46, a long life for a man in the Copper Age. Scientists have also pinpointed his cause of death as blood loss caused by an arrow wound to his left shoulder. However, the question "What did he look like?" has remained elusive, according to the museum.

As such, Ötzi has inspired many reconstructions and artistic interpretations. These include a work by the British artist Marilène Oliver, who translated a CT scan of the body into point plots. She drilled them into acrylic sheets, which she layered and fused to create a ghostlike 3-D representation.

The new reconstruction is part of the exhibit currently on view at the museum – "Ötzi20 - Life. Science. Fiction. Reality" – celebrates the first 20 years of the iceman's second life. It includes an exploration of media coverage and images of Ötzi, according to a press release.