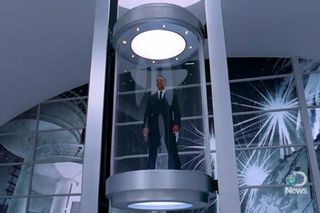 Will Smith from a scene in 'Men in Black 3' -- will we ever need to be protected from an ecosystem of extraterrestrials?
(Image: © Columbia Pictures)

We are constantly being told that our galaxy must be swarming with alien civilizations, yet there seems to be a distinct lack of evidence as to their whereabouts.

This contradiction is at the very core of a conundrum known as the "Fermi Paradox" -- a problem that was highlighted in the 1950's by Italian physicist Enrico Fermi. Six decades later and the movie "Men in Black 3" has just been released -- the third movie in a trilogy about aliens living on Earth, interacting with us and safeguarded by a covert organization called the "Men in Black."

Movie culture seems obsessed with the possibility of finding alien intelligence, yet the Paradox asks: 'where are they?'

The Fermi Paradox attempts to understand why we haven't found any extraterrestrials considering we live in a Universe that's 13.75 billion years old and unimaginably vast. Given the sheer scale of things, it's hard to imagine that the Universe isn't teeming with life. Why is there no evidence for it?

Even if we just limit the focus on the Milky Way, which is thought to host over 300 billion stars, then if only 1 percent of those stars possess planets hosting life, and a smaller number of them host intelligent life, then there should be thousands, if not millions, of civilizations out there. Surely that's enough to hire some real-life MIBs to protect us! Alas, it seems the evidence suggests not.

We could consider the Paradox in another way and wonder why it's not just the aliens that seem absent, but there also seems to be a distinct lack of their artifacts, too. After all, the Universe has been around for so long and our sun is considered to be a third generation star; surely at least second generation stars would have produced enough heavy elements to facilitate the formation of life?

This would mean that there should have been plenty of time for them to get here even using slow methods of propulsion almost available to us today. Yet we wait ... and nothing. Even our attempts to search for ET's radio signals have failed, so far.

There are many attempts to provide reasons for this lack of evidence. One is simple: life is not as common as we thought -- perhaps civilizations like ours are incredibly rare.

This is a good point, it would explain why we have yet to meet an alien. However, the discovery of planets orbiting other stars (to date, numbering well over 700 confirmed exoplanets); the detection of organic compounds in comets and the preponderance of water in our solar system suggests that the conditions and ingredients for life are indeed common. Given all this, it's hard to understand why life wouldn't have evolved in more than one place.

But if alien civilizations are out there, then the distances and time scales separating the stars may still be so vast as to not allow communication between our ET neighbors -- we may be quarantined by huge volumes of space.

The nearest star to ours, Proxima Centuari, is just over 4 light-years away and with our current technology it would take hundreds of thousands of years for a space ship to get there. Even a radio message traveling at the speed of light would take over 4 years to get there -- assuming the "Proxima Centaurians" are listening at the right frequency and in the right direction in the first place.

Maybe there is a more sinister reason! With intelligence comes advanced technology -- tinkering with atoms, fusion, fission and nuclear weapons -- and with this comes a risk of self destruction, either through war or through accidents at an extinction level. Alternatively, with superior intelligence comes the desire to destroy other civilizations less intelligent, in the same way its not uncommon for us to swat a fly (not that I condone such acts of brutality). Intelligent civilizations may simply work through the galaxy, exterminating as they go; motives may be simple brutality, sport, domination or just prejudice. But whatever the reason, some superior civilization wiping out all others would explain the absence of aliens.

This is all just conjecture, but the facts are simple: the Universe is big, the Universe is old, conditions for life seem common, yet aliens seem somewhat elusive. Maybe the scale of things makes it incredibly unlikely for physical contact, so perhaps radio communication is the way to go. If so, we all need to be looking in the right direction and tuning into Universe FM instead of our local channels for this to work.

For now, we will remain confused at the Fermi Paradox, wonder where the aliens are and enjoy films like "Men In Black 3" that give us a tantalizing glimpse at a future that may one day be ours.