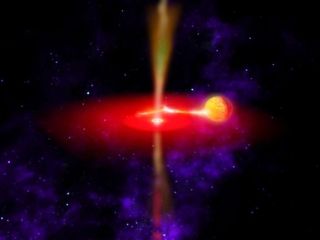 This artist's concept shows what the black hole GX 339-4 might look like as it sucks excess matter from a star orbiting only a few million miles away.
(Image: © NASA)

The supermassive black holes thought to lurk at the heart of most galaxies attained their enormous sizes by eating stars, a new study suggests.

Some theories hold that these galactic black holes — which seem to contain millions to billions of times the mass of our sun — get so hefty by consuming huge quantities of gas or merging with other black holes; others suggest the objects were simply born large. But the new study reports that they likely get supermassive mainly by ripping apart double-star systems and devouring one of the stars.

"I believe this has got to be the dominant method for growing supermassive black holes," lead author Benjamin Bromley of the University of Utah said in a statement.

The team's work follows up on the 2005 discovery of hypervelocity stars, which were flung out of our Milky Way's center by gravitational forces and are traveling at speeds of 1.5 million mph (2.4 million kph) or more — fast enough to escape the galaxy and go zooming off into the depths of space.

Hypervelocity stars are thought to originate in binary systems that wander too close to the Milky Way's central black hole, which appears to weigh as much as 4.3 million suns. Tidal forces eject one star, the theory goes, and capture the other, which eventually becomes food for the growing black hole. [Photos: Black Holes of the Universe]

The researchers modeled each step in this process, and their results pinpointed stars as the galactic monsters' chief sustenance.

"We put the numbers together for observed hypervelocity stars and other evidence, and found that the rate of binary encounters [with the Milky Way's supermassive black hole] would mean most of the mass of the galaxy's black hole came from binary stars," Bromley said. "We estimated these interactions for supermassive black holes in other galaxies and found that they too can grow to billions of solar masses in this way."

As many as half of all stars are in binary pairs, so they are plentiful in the Milky Way and other galaxies, researchers said.

The results further indicated that our galaxy's supermassive black hole has likely doubled to quadrupled in mass during the past 5 billion to 10 billion years by eating stars.

"When we look at observations of how stars are accumulating in our galactic center, it's clear that much of the mass of the black hole likely came from binary stars that were torn apart," Bromley said.

The scientists published their results online Monday (April 2) in The Astrophysical Journal Letters.