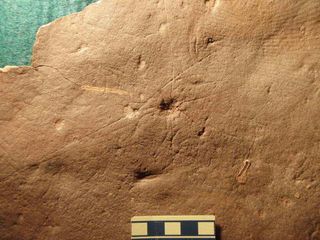 The ancient animal Coronacollina acula, with the round depression in the middle representing its body, while the four lines radiating from it were its needlelike "spicules." (Scale bar is in centimeters.)
(Image: © James G. Gehling.)

The oldest animal with a skeleton has been discovered, a creature shaped like a thimble that lived on the seafloor more than a half-billion years ago, researchers say.

These findings shed light on the evolution of early life on Earth, and could also help scientists recognize life elsewhere in the universe.

Hundreds of fossils of the animal, named Coronacollina acula, were discovered in ancient sandstone beds in south Australia, suggesting the area was once a shallow seafloor.

"Coronacollina is an example of one of the earliest animals on Earth," said researcher Erica Clites, a paleontologist at Glen Canyon National Recreation Area in Arizona, who completed research on Coronacollina while she was at the University of California, Riverside.

The animal measured up to 0.6 inches (1.5 centimeters) high and nearly 0.9 inches (2.2 cm) wide; radiating from the top of its body were at least four needlelike "spicules," each up to 14.5 inches (37 cm) long, which the scientists suspect it used as a skeleton to support its body somewhat like the poles of a tent. C. acula likely was not capable of locomotion, and so probably fed as sponge does, filtering food from the water, the researchers say. [Stunning Photos of the Very Small]

The creature is between 550 million and 560 million years old. This places it in the mysterious Ediacaran period, when life first became large enough to be seen with the naked eye. The animals from the Ediacaran are almost universally bizarre, and very difficult to link with any modern animal groups.

"Up until the Cambrian period, it was understood that animals were soft-bodied and had no hard parts, yet Coronacollina does have hard parts," Clites said. "Coronacollina provides the first unequivocal evidence of a macroscopic, multi-element organism possessing skeletal support structures within the Ediacaran."

The fate of Ediacaran animals has been a matter of debate, with many suggesting they were essentially failed experiments at life that virtually all went extinct just before the explosive diversification of life seen in the Cambrian period, when all the major groups of animals seemed to materialize rapidly. However, C. acula is constructed the same way Cambrian sponges were, suggesting it could be a missing link between the Ediacaran and Cambrian and hinting that not all Ediacaran animals vanished without a trace.

"Coronacollina not only compares well in shape to something identifiable — a sponge — but it specifically compares to the early Cambrian sponge Choia," Clites said. "More parallels between the Ediacaran and Cambrian may be identified by researchers in the future."

"Understanding the form early animals take on Earth may help scientists recognize structures on other planets that might otherwise go unnoticed," Clites explained. "Coronacollina outwardly appears like lines and pits in the rock, but we know that these textures represent a multi-element organism. Understanding the array of shapes of Earth's earliest animals provides a search image to be used during space exploration."