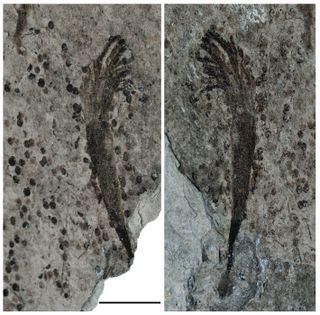 One of the approximately 600-million-year-old fossils unearthed in China this organism was probably seaweed. It has a root-like holdfast to secure it to the sea floor, a conical stem and a crown of ribbon-like structures.
(Image: © Zhe Chen)

Strange fossils, including some that could be predecessors to modern animals, found in China shed new light on the evolution of large, complex organisms, and indicate that they may have diversified earlier than  thought.

Researchers believe that the rocks containing these fossils, found in southern Anhui Provence, date between 635 million and 580 million years ago. The new types of organisms discovered in them include two that are fan-shaped, as long as 2 inches (5 centimeters), and resemble seaweed, as well as three other new types of organisms that are difficult to classify as animal or plant.

"Some of my colleagues are more leaning toward the animal interpretation," said study researcher Shuhai Xiao, a professor of geobiology at Virginia Polytechnic Institute and State University. "But my personal view is that we still don't know what they are."

One of the three could be interpreted as resembling the early life stage of a polyp, or a sea anemone. The other two mysterious organisms have tube-like structures that could represent the digestive system of worm-like animals. For one of these, the call for plant or animal depends on perspective.

You could interpret the bulbous structure at one end of its stalk as a holdfast, which seaweed use as an anchor, making the organism a plant. Or you could see a proboscis, a tube-like feeding structure, and a simple, worm-like animal, the authors write in today's (Feb. 17) issue of the journal Nature.

These fossils were discovered in the black shale of what is called the Lantian Formation in China, and they date back to the first part of the Ediacaran Period, the time when life became big, or at least visible to the naked eye.

"Animals in the Ediacaran Period are almost universally bizarre, and it is very difficult to place them in any modern animal phyla," Xiao told LiveScience. "They may be precursors to modern animals or offshoots of modern animals that don’t have any direct descendants."

Until now, scientists had thought the oldest collection of fossils of large, complex life forms was the Avalon assemblage, dating back to about 579 million to 565 million years ago. It contained equally strange and unclassifiable organisms called rangeomorphs.

Because the Lantian fossils are older and contain complex, but very different organisms from those in the Avalon formation, the researchers write that large, complex organisms may have diversified earlier than thought.

The fossils described by Xiao and his colleagues, including lead author Xunlai Yuan of the Chinese Academy of Sciences, were preserved at a critical time in Earth's history, arriving after the end of “a snowball Earth event,” when global temperatures dropped and ice extended into the tropics. Meanwhile, the explosion of animal diversity that came with the Cambrian Period was still a few tens of millions of years away.

During the Ediacaran Period, the oceans were in transition as oxygen spread into their depths. However, the discovery of these fossils makes the oxygen story more complex than a simple, permanent switch from oxygen-free to oxygen-rich oceans, according to Xiao.

A geochemical analysis of the rocks indicates the fossils were deposited in an environment without oxygen. However, large, complex organisms like these would have needed oxygen to survive, creating a contradiction.

The researchers think the ocean may have fluctuated between an oxygenated and an oxygen-free state during this transition. When waters became oxygenated, the organisms colonized them, but the frequent oxygen-free conditions would have wiped them out, Xiao explained. The geochemical data available are not sensitive enough to detect brief fluctuations, he said.