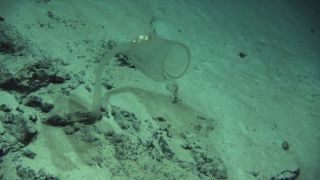 A new species of sea squirt was discovered in the deep sea off Australia. The creature traps nearby fish in a manner similar to a Venus flytrap.
(Image: © Advanced Imaging and Visualization Laboratory, WHOI/Jess Adkins, Caltech.)

A newly identified species of carnivorous sea squirt lurks in the deep sea off Australia, where it traps and devours meaty prey swimming past.

The deep-sea resident, along with two other marine species that are new to science, were discovered by an international team of scientists during a month-long voyage aboard the research vessel RV Thompson to a marine reserve near Tasmania. The findings were announced today.

An expedition below the surface relied on the remotely operated submersible called Jason, which dropped to depths of more than 13,000 feet (4,000 meters).

"It was truly one of those transcendent moments," said the cruise's lead scientist, Jess Adkins of Caltech, referring to the descents made by Jason. "We were flying — literally flying — over these deep-sea structures that look like English gardens, but are actually filled with all of these carnivorous, Seuss-like creatures that no one else has ever seen."

During the voyage, researchers explored the so-called Tasman Fracture Zone within the Tasman Fracture Commonwealth Marine Reserve. Until now, scientists had only observed this zone to a depth of about 5,900 feet (1,800 meters).

Jason allowed scientists to peer much deeper into the abyss. That's where researchers spotted the new sea squirt, which is about 1.6 feet (half a meter) tall. The transparent organism is triggered to feed when a fish or other swimming snack touches the sea squirt. Similar to what happens in a Venus flytrap, the funnel-shaped section of the squirt's body traps and collapses around prey.

Sea squirts are considered tunicates, a type of marine organism with a rubbery outer covering called a tunic. The animal typically feeds by pushing water in and out of tiny tubes, filtering out bacteria and algae and other bits of food.

Other findings included newly identified species of barnacles and a sea anemone that's new to science and which the researchers called "the bane of our existence," because it looks just like a coral species the scientists were trying to collect.

In addition to surveying the life that exists in the area's deep sea, researchers hope to use the corals there to shed light on climate changes over the past 100,000 years or so.

The voyage was the second of two cruises taken by the team, which included researchers from the United States (including scientists from Caltech and the Woods Hole Oceanographic Institution in Massachusetts) and Australia's Commonwealth Scientific and Industrial Research Organization.

The research was funded by the National Science Foundation, CSIRO, the Commonwealth Environmental Research Facilities' Marine Biodiversity Hub, and the Australian Department of the Environment, Water, Heritage and the Arts.