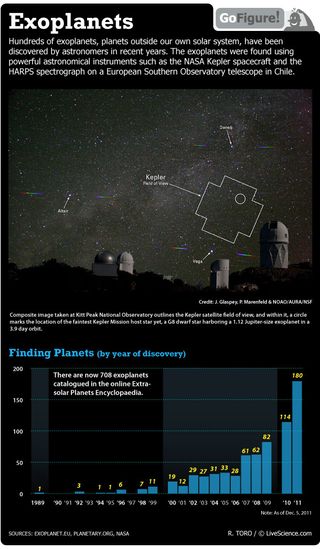 Just this week NASA researchers announced the planet-hunting Kepler spacecraft had spotted more than 1,000 exoplanet candidates and confirmed the existence of an alien world circling within its star's habitable zone — at a distance where it's not too cold nor too hot (along with other just-right conditions) for liquid water to exist.

Lying within the habitable zone means there's a chance such a planet could have conditions necessary to support life.

[7 Theories on the Origin of Life]

In its first 16 months in action, with this new bucket of planets, Kepler has now discovered 2,326 potential planets. If confirmed, the identified planets would quadruple the current 700-plus exoplanets known beyond our solar system.

The exoplanet-hunting journey, which has include many observatories, has had many firsts. For instance, in 2008 astronomers announced they had snapped what they called the first-ever direct images of exoplanets, including a visible-light snapshot of a single-planet system and an infrared picture of a multiple-planet system. Other exoplanet firsts have included: the first known exoplanet, called 51 Pegasi b in 1995; the first, lowest-mass alien world; the first rocky world, called CoRoT-7b, spotted in orbit around another star; and the first super-Earth exoplanet with a confirmed atmosphere.

As with most things in space science, surpassing frontiers is the name of the game, and with exoplanet hunting the end-all is arguably Earth's twin.

Of the total 2,326 candidate planets that Kepler has found to date, 207 are approximately Earth-size. About 680 of them are a bit larger than our planet, falling into the "super-Earth" category, while 48 are considered candidate planets in the habitable zones of their stars, according to SPACE.com.

Only time will tell, as Kepler typically requires an object to cross in front of, or transit, its star three times in order to flag it as a planet or not. So the planets found in the quickest time must be pretty close to their host stars, meaning they are likely scalding hot (not great places for life to sprout).

Given more time, more distant, and perhaps more Earthlike, worlds could come out of hiding for the spacecraft.