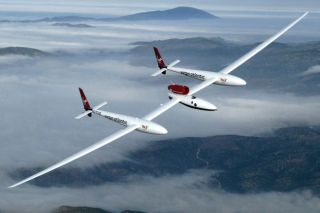 The GlobalFlyer in the air.
(Image: © Virgin Atlantic)

A one-of-a-kind experimental aircraft is ready to attempt the first solo, nonstop circumnavigation of the globe without refueling. The flight is firmly slated for Monday, Feb. 28, though takeoff is still dependent on weather.

Launch of the Virgin Atlantic GlobalFlyer from Salina, Kansas has been given a thumbs-up by officials, who have delayed the attempt since January because of bad weather locally and along the route. Liftoff of the aircraft is expected to take place between 2:00 p.m. and 6:00 p.m. Central Time (3-7 p.m. ET).

Officials had said Saturday that Monday would likely be a go. The expected launch was confirmed Sunday in a statement provided to LiveScience.

GlobalFlyer aircraft will fly at up to 52,000 feet and travel approximately 23,000 miles at speeds in excess of 285 mph.

Takeoff remains subject to ground, weather and jet stream conditions, but both Branson and pilot Steve Fossett said Sunday that improved conditions would allow launch of the plane.

On Feb. 23, mission officials has said the flight would not depart until March.

The route will begin from the Salina airfield and then follow the jet stream winds across the Atlantic to the United Kingdom. It will be piloted by adventurer Steve Fossett. From there, Fossett will head Southeast across the Mediterranean and the Gulf region before turning east towards Pakistan, India, China and Japan.

The final leg of the journey will take the plane out over the Pacific towards Hawaii before crossing the West Coast of the United States and returning to the Kansas launch site.

A dedicated Web site - www.virginatlanticglobalflyer.com - will provide details and updates on the Virgin Atlantic GlobalFlyer's progress and live coverage of the record-setting attempt during the flight, including live reporting of the plane's takeoff and landing.