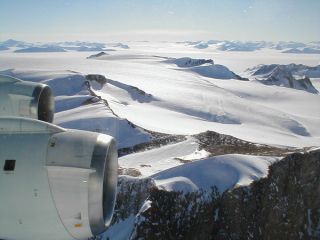 Some spectacular scenery was in view from NASA's DC-8 flying laboratory as it flew a low-level data collection flight over George VI Sound on the Antarctic Peninsula on Nov. 16.
(Image: © NASA/Chris Miller)

After weeks of flying hours-long missions over the barren icescape of Antarctica, NASA's IceBridge campaign has come to a close for the season, and scientists hope it yields a better picture of the changes happening on the southernmost continent.

The 2011 Antarctic mission began in October with IceBridge's Gulfstream V and DC-8 planes taking off from their base in Punta Arenas, Chile, and flying particular paths over the Antarctic ice. The flights, which typically last 10-to-11 hours, take the same routes year-to-year to better observe the changes happening there.

The early flights focused on sea ice, before too much of it melted with the warming temperatures of the austral spring. IceBridge sea-ice flights are designed to help scientists understand why sea ice in the Southern Hemisphere is not thinning to the same extent seen in the Arctic. [Images: IceBridge in Action Over Antarctica]

On Nov. 9, the team made its longest flight of the mission to date, a 12.5-hour flight on the DC-8 to the Thwaites Glacier and eastern Byrd Land, including overflights of ice-core-sample locations. This flight also reached the most southerly point of any of the IceBridge flights, with a latitude just short of 80 degrees south.

"Upon reaching the Amundsen Sea, the weather was not at all promising, but after a short time, it cleared up and conditions remained favorable for the rest of the day," Pilot-in-Command Troy Asher of NASA's Dryden Flight Research Center said in a statement. "The research area was like Kansas in Antarctica, flat for as far as the eye could see in all directions."

After a delayed takeoff to allow weather over the target area to clear, the team was back in the air Nov. 11 for a low-level return flight over the Thwaites Glacier. As a bonus, it also flew a now-famous crack that recently broke across the Pine Island Glacier to get data with its topographic mapper.

"The view was spectacular of both the rift and glacier edge under sunny skies," said NASA Dryden Mission Manager Chris Miller, who noted that the glacier rift should create a calving iceberg anytime between a few weeks from now and a few months.

Earlier in the mission, the team also flew over Pine Island Glacier to take new measurements over areas where a drilling mission will be on the ground in a few weeks to take up-close measurements and drill cores of ice from the glacier to better understand its movements and potential to melt. Pine Island Glacier is the fastest-moving glacier in western Antarctica, gliding at a clip of about 2.5 miles (4 km) per year.

An 11.2-hour flight Nov. 13 took the IceBridge team over the Crosson Ice Shelf, with some of the data-collection flight tracks extending over the Thwaites and Dotson ice shelves and over Mt. Murphy in between.

On Monday, Nov. 14, the IceBridge science team had a rare opportunity to collect data over glaciers on the east side of the northern Antarctic Peninsula that normally are enshrouded by clouds.

After a final weekend of data-collection flights, the DC-8 and the IceBridge team are scheduled to return home Nov. 22 to the airborne science laboratory's base at the Dryden Aircraft Operations Facility in Palmdale, Calif. The Gulfstream returned to the United States earlier this month.

This story was provided by OurAmazingPlanet , a sister site to LiveScience.