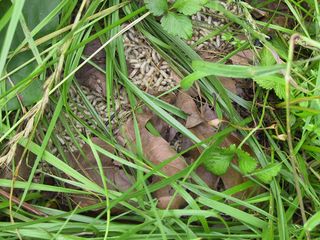 When investigators exhumed the body of 33-year-old Jonathan Blackwell, they found something they didn't expect: insect larva on his remains.

Insects attracted by a decomposing body can prove to be important evidence, because they can help investigators establish a crime's timeline. But in Blackwell's case, the larva appeared to be out of place.

Blackwell's remains were recovered in December 2006. By then, he had been missing for about two years, ever since leaving work at a Virginia Goodyear Plant on Oct. 7, 2004, according to news reports. But the blowfly larva found buried with him had reached a stage of larval development indicating they were about seven days old.

An investigator on the case contacted Wes Watson, a professor of entomology at North Carolina State University, who reviewed photos from the scene. The insect evidence indicated the shallow grave where Blackwell was found, in a field near a barn in Guilford County, N.C., was not his first grave, Watson said.

It turns out that Blackwell was buried for most of those two years in another grave before his killer dug up the corpse, Watson said.

During summer in the south, a corpse left exposed can be reduced to a skeleton within a week. Burial not only inhibits insects from colonizing a body; it also slows down the decomposition process by limiting the microbes' access to oxygen.

It appears Blackwell's first burial preserved his body somewhat, leaving tissue for the blowflies to colonize after his killer dug him up, investigators concluded.

This situation raised a question for Watson, a veterinary entomologist who consults on forensic cases: If blowfly larva were buried with a corpse, would they be able to develop and emerge as adults?

Metallic-bodied blowflies look a lot like common houseflies, and they are one of a number of insects attracted by dead animals, including human corpses. For instance, carrion beetles arrive to lay their eggs, and predatory beetles show up to feed on the other insects' larva. "It is quite remarkable the number of different species that are found on the remains," Watson said.

Blowflies arrive quickly, usually within just minutes of death, attracted by the gases released by the newly dead body. They then start to lay their eggs around the nasal and oral cavities where these gases, associated with the start of decomposition, are escaping. [10 Tales from the Crypt & Beyond]

In warm weather, the eggs hatch within about 24 hours, then the fly goes through three larval instars, or phases of development. At the end of their larval lives, the young blowflies move away from the corpse, burrow into the ground, form pupae and metamorphose into their adult, winged form, which crawls to the surface and flies away. The amount of time this entire process takes depends on temperature, but in North Carolina summers, the blow flies develop from egg to adult in a week to 10 days.

To see how reburial would affect the insects' progress, Watson and three colleagues put fly larvae and pupae from two species of blowfly into PVC pipes covered with 2, 10 and 20 inches (5, 25 and 50 centimeters) of soil.

"Most people who commit crimes use a shallow grave; they don't have time or patience to dig a grave that's deep," Watson said.

In all cases, at least some adult flies emerged. Overall, third instars, the most active larval stage, were the most successful. The researchers tested the third instars at 4 feet (1.2 meters), and found that some were still able to make it, although one species was considerably more successful than the other.

This is the first report of blow flies climbing up through soil covering a corpse, and it means that insects found in the soil around a buried body — not just on an exposed corpse — can provide important evidence for investigators, including helping them construct a time line for the crime and alerting them that a body may have been moved, as Blackwell's had been, according to Watson.

After Blackwell's body was found, and his family learned of his fate after two years of limbo, a murder warrant was issued for Stacey Webster, who turned himself in, according to a report by WFMY News 2. Webster was convicted of the murder in 2010.

Editor's Note: This story was updated on Nov. 12 at 9:37 a.m. to correct the amount of time blowfly development takes during warm weather.