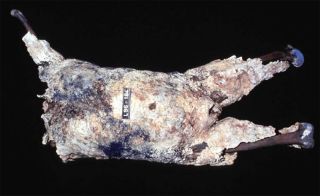 A headless human corpse floating in a bay of Lake Brienz in Switzerland — first thought to be a dead sheep as its thigh bones and an upper arm bone protruding from its torso were encased in a cement-like cocoon — has divulged its secrets.

"When you see such a kind of body with adipocere, it is absolutely clear it is not a fresh body," said Michael Thali, then a young resident doctor in Bern and now a professor of forensic medicine at the University of Zurich. "I was thinking then this body must be some months or even some years [old]."

But after some creative CSI know-how, Thali, who had taken this body on as his first big case, realized ther corpse was much, much older, from some 300 years ago. Other clues suggested the man had drowned and was engulfed by the surrounding sediments only to be uncovered after some earth-shaking in the region. [8 Grisly Archaeological Discoveries]

When a body is discovered the most urgent question investigators must answer is: How long has this person been dead? The answer determines whether the body becomes the focus of criminal investigation or of historical interest.

At first, Thali estimated this corpse to be about six months to five years old. Then he noticed the adipocere, which is naturally white, had unusual patches of intense blue. He suspected the blue had come from the person's clothing, a theory he later dismissed in favor of algae. But biologists from the University of Bern, where he worked at the time, informed him it was likely a mineral.

If a mineral had precipitated on the body's adipocere shell, Thali suspected the person had died much earlier.

Thali and colleagues performed an X-ray and a physical examination. To peek beneath the shell that encased the remains, including the preserved heart and other soft structures, Thali and his colleagues had to cut through it with a saw.

Records of adipocere extend back to the exhumation of remains in a Paris cemetery at the end of the 18th century. Sometimes considered a form of mummification, it forms when decomposition takes a strange turn, and fat in the soft tissue transforms into the hardy soap-like substance. This substance acts as a preservative and resists normal decomposition, according to Douglas Ubelaker, a senior scientist at the Smithsonian Institution's National Museum of Natural History and an author of a review of two centuries of research on adipocere.

"We know certain factors that seem to be important in triggering that transformation," Ubelaker said. These include an oxygen-free environment, the presence of certain bacteria and body fat, warm temperature, a mildly alkaline environment and moisture, either in the environment or from the body itself. While formation can take time, some research indicates that it can begin within a few days after death in the right environment.

Its texture can vary. While this corpse's adipocere resembled concrete, fresher adipocere can be softer.

"A lot of people say it's greasy, I always think of it like a thick cottage cheese consistency, because it's kind of lumpy, also," said Ann Ross, an anthropologist at North Carolina State University, who has encountered adipocere in her own investigations. "Now you'll never eat cottage cheese."

In 1997, Ross, who was not involved in the Swiss research, consulted on the project Physicians for Human Rights to help identify the remains of Bosnians killed by Serbian forces about six years earlier during war in the former Yugoslavia. The project ultimately recovered about 74 bodies that had been thrown down a 262-foot (80-meter) mine shaft.

The shaft was damp, and while most of the bodies were just skeletons, many had some adipocere, and she remembers coming across an upper arm bone wrapped in the stuff.

"Most of us, we consider it a nuisance, and it's true because it is very difficult to get off the bone," she said.

And it's the bones that contain clues to the person's identity, including their sex, age at time of death, and any sign of trauma. The teeth can be used to make identifications, and they along with the mid-facial region of the skull can offer clues to a person's ethnic ancestry, she said.

After removing the adipocere from the pelvic bones, Thali and colleagues determined their body had belonged to a man — a woman's pelvis is adapted for giving birth. And so the corpse became the "blue man."

Because it preserves soft tissues, which in this case included the blue man's heart, stomach and intestinal tract, adipocere can create the appearance that an individual died much more recently than he or she actually did, according to Ubelaker, who was not involved in the Swiss research.

"Once it forms, it is extremely tenacious material so it can be misleading," he said.

But adipocere's preservative nature also has an advantage. The blue man's stomach and intestines, for example, contained cherry pits, which, if decomposition had taken its course, would not have survived long. These were evidence of the individual's diet, and, more important, material that researchers could date, Ubelaker noted.

Using radiocarbon dating, a method that relies on the presence of radioactive carbon atoms, researchers examined a cherry pit and bone collagen from the corpse. The radiocarbon dating put the man's death back as far as 300 years.

Based on the concentration and type of diatoms — a type of algae — found in the man's bone marrow, Thali and colleagues believe he drowned.

About one week before the body was discovered, two weak earthquakes occurred in Switzerland. This may have caused an underwater landslide that exposed the once-buried body, according to Thali and his colleagues, who describe their work in a study published online in the journal Forensic Science International.

The blue mineral — the most exciting aspect of the case, according to Thali — is an iron phosphate called Vivianite, described only three times before on bodies, including that of the 5,300-year-old Italian ice mummy Ötzi.