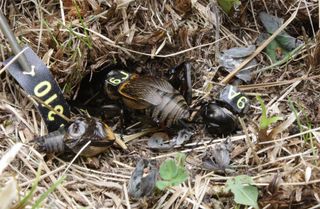 Males chivalrous enough to lay their lives down for their lovers can be found even among crickets, scientists now reveal.
(Image: © University of Exeter (Photo for use ONLY with accompanying article on chivalrous crickets))

Males chivalrous enough to lay their lives down for their lovers can be found even among crickets, scientists now reveal.

Male crickets are probably best known for their songs, making chirping sounds by rubbing their wings together in order to woo females. Now it appears the insects may behave romantically not just during courtship, but also in what might be their last act.

"Many people probably think that 'chivalrous' behavior is exclusive of humans or closely related mammals, linking it in some way to education, intelligence or affection," said researcher Rolando Rodríguez-Muñoz, a behavioral biologist at the University of Exeter in England. "We show that even males of small insects, which we would not define as intelligent or affective, can be 'chivalrous' or protective with their partners."

Prior research of cricket mating behavior was mostly conducted in the lab. This had suggested that male crickets guarded females to keep them from mating with rivals and prevent them from removing the sperm the males thrust into the females. Overall, the impression was that males dominated female partners through bullying. [Read: Cricket Sets Testicle Size Record]

To see what might actually happen in the wild, researchers watched how field crickets (Gryllus campestris) behaved in a meadow in northern Spain from 2006 to 2008. The insects were monitored with 96 infrared cameras and microphones during each spring 24 hours a day, with each cricket bearing a tiny numbered tag glued onto its back to help identify it. This helped the scientists view the everyday dramas the crickets faced — who each partnered with, how long specific males and females spent together, the amount of time each male spent chirping to attract mates, and fights that occurred when a male approached a burrow occupied by another male.

Additionally, a tiny piece of leg tissue less than 1 millimeter across was taken from each insect to create a DNA fingerprint of each cricket. This helped determine paternity and relatedness in general among the insects across generations.

"Watching the recorded videos — on average about 50,000 to 100,000 hours of recordings a year — is very time-consuming and very hard work," Rodríguez-Muñoz told LiveScience.

In addition, keeping the system working every year required a huge effort. "Last year, one-third of the cameras stopped working at a key period during the breeding season, and we could not find the problem," Rodríguez-Muñoz said. Finally, they found "it was due to a single power wire that was not properly screwed."

In the line of fire

Analysis of more than 200,000 hours of infrared video footage revealed that lone female and male crickets experienced similar rates of getting eaten by predators such as birds. However, when a pair was attacked, the female's chances of survival rose as the male's chances dropped.

"Relationships between crickets are rather different from what we'd all assumed," Rodríguez-Muñoz said. "Rather than being bullied by their mates, it seems that females are in fact being protected. We could even describe males as 'chivalrous.'"

No evidence was seen of males being aggressive toward their mates or hindering a female's movements to or from their burrow. Instead, males apparently put the lives of their mates ahead of their own, protectively allowing females to scamper into the safety of a burrow before them even though it meant a dramatic increase in their own risk of getting eaten. In other words, females apparently benefit as much from this relationship as the males do.

"It looks like males really wait until a female is under cover before getting themselves to safety," said Tom Tregenza of the University of Exeter. "Guarding seems to be their top priority."

"Males were protective of their partners, but very aggressive with potential competitors," added Tregenza. "Males cohabiting with a female won more fights against approaching rival males than when they were on their own."

Perhaps this work "shines a light on the fact that apparently chivalrous acts may have ulterior motives," Rodríguez-Muñoz said. "Did Sir Walter Raleigh throw his cape onto a muddy pool in front of Queen Elizabeth just because he was a nice guy? I think not."

The male crickets are rewarded for their risky behavior, as their extended stays with females mean they get to have sex more often. They essentially trade a longer life span for a greater chance to father offspring with each of their partners. [Related: Top 10 Swingers of the Animal Kingdom]

"Males are still benefiting," Rodríguez-Muñoz said. "Even if a male is killed, the surviving female is carrying his sperm and ensuring that his DNA lives on."

The footage we filmed and spent months analyzing has given us a rare glimpse into how natural selection really happens in the wild," Tregenza said. "Although our study focused on one population, it is likely that our findings are applicable to other species across the insect world and could even have relevance for other animals. Perhaps females aren't getting pushed around quite as much as we thought they were."

The degree of chivalrous behavior among males might vary depending on factors such as the size of the cricket and predator populations, the researchers added.

"We are looking forward to seeing whether chivalry prevails in future generations," Rodríguez-Muñoz said. "There may be some years when both sexes behave in a more obviously selfish fashion and attempt to escape down the burrow first."